Collaborative Robots Go from Factory to Farm to Refrigerator

Farming is no stranger to automation, but many agriculture-related jobs demand a soft touch to handle delicate fresh foods, or require robots to work closely alongside humans and animals. Collaborative robots (“cobots”) are making dramatic inroads for those applications, giving agriculture and dairy operations the advantages of optimized production, increased competiveness, and the opportunity to free skilled labor for more appropriate tasks. And that all comes with the fastest payback time in the industry, making cobots ideal for agricultural operations.

A robot even a cow could love

GNE Farm Equipment is using collaborative UR robots to reduce the labor costs of milking cows, which is helping the company address a decade-long shortage of qualified milkers. The cobot automates the labor-intensive process of manually disinfecting cows’ udders before and after being milked, and offers dramatic improvements over traditional robotic approaches.

A typical system requires a large robot with a camera and spray system. When triggered, the robot sends a six-foot-long pipe with the sprayer under the cow to apply the disinfectant. These floor-mounted robots require expensive installation into the milking parlor floor, as well as fencing to safeguard employees. The installation process interferes with dairy production for at least a month, and even after the robot is installed, it requires professional programming and training for all employees. Modular robotic systems are an option that can reduce installation complexity, but both floor-mounted and modular approaches take up valuable floor space that reduces the number of milking stalls available—which reduces output. And if the robot loses power while the pipe and sprayer are under the cow, the spray arm could injure the cow and damage the rotary milk stall and robot, resulting in costly repairs, reprogramming, and additional production downtime.

In contrast, the UR robot is moved in place on a small pallet jack, taking up no more space than a human milker. The system includes on-board storage for the robot computer, disinfectant storage tank, pumps, valves, and controls. It needs only a 120V hookup (not 240V or 480V as required for traditional large robots), so can be plugged into any available outlet. The UR robots need no safety caging—built-in safety features stop the robot’s movement if someone enters the working area. Similarly, if the robot loses power, the lightweight, flexible spray arm bends so it won’t injure the cow and is spring-loaded to return to the working position. The UR robot is easy for the dairyman to program using the touchscreen point-and-click application and simply moving the robot arm to the desired positions.

“No other robot on the market is currently able to offer this ease-of-use system,” says owner of GNE Farm Equipment, Gerard Niessink. “Since no specialists are needed for operation, the UR robots results in a faster payback. With the available bank lease programs there is no money out of pocket for the dairy man." 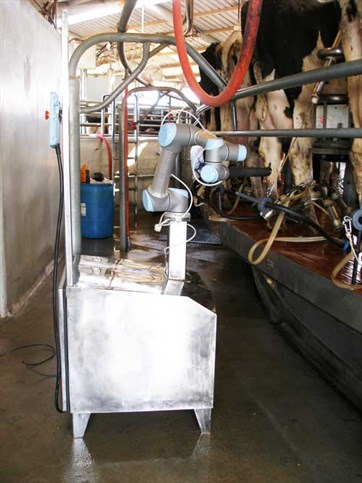 Cobots handle delicate agricultural products—independently and alongside other robots

At Orkla Foods in Sweden, a UR cobot works independently to pack vanilla cream bags into cartons but is also part of a network that includes a carton erector, a carton sealer, and a filling machine. "An important requirement was that the robot had to work flawlessly so that we would not need supervision or extra support for it to work. It would also be a major advantage if it did not require safety guarding around it and could work safely alongside our employees," says Johan Linné, site manager at Orkla Food. The payback period for the UR10 robot installed at Orkla was only six months.

Similarly, Cascina Italia processes millions of eggs per day using a UR5 robot to improve flexibility and operational efficiency. The cobot relieves employees from the strenuous process of preparing bulky packages for large-scale distribution, but its fenceless operation allows the robot to work side-by-side with employees on the production lines. The company sorts four sizes of eggs based on weight to produce more than 220 commercial options in different formats, depending on the type of packaging required.

"We are convinced that the collaborative robot solution is extremely useful for facilities like ours that have constraints on flexibility, available space and budgets for investment, which make traditional robotic solutions difficult to implement,” says Ruggero Moretti, facility manager of Cascina Italia. “The results obtained so far are excellent, so much so that we expect return on our initial investment in less than a year, with the additional advantage of having further refined and improved the quality of our packaging processes."

Collaborative robots are ideal for hygienic food processing environments, can operate around the clock during seasonal periods of high production, and can be easily redeployed to new applications as needed. 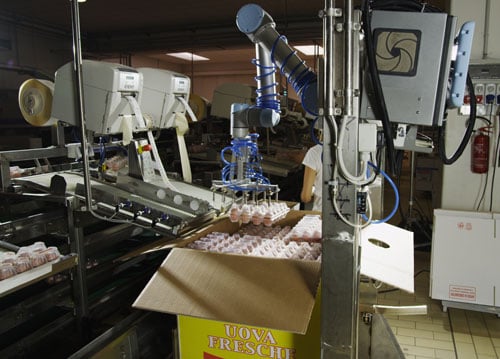