Cnc applications are some of the most commonly automated. These repetitive tasks are ideal for robots, which can work at higher speed than human workers and offer exact, consistent movement for higher manufacturing quality and greater productivity. And new safety advancements make collaborative robots (“cobots”), such as those from Universal Robots, even more compelling.

Whippany Actuation Systems, a New Jersey-based manufacturer for the aerospace and defense industry, was faced with the need to increase capacity. The options came down to adding another CNC machine or to add robotics to support unattended machining. Whippany introduced a Universal Robot with Robotiq gripper and was able to add a second shift on its existing CNC machine. Phil De Mauro, Whippany manufacturing engineering leader, said, “We’ve added capacity by being able to run the machine during unattended hours, but it’s also freed-up skilled workers to do other tasks as opposed to loading and unloading the machine—it frees them up to do more valued-added activities.” Automation has improved Whippany’s margins, increased competitiveness, and helped shorten lead time—leading to the plan to implement robotics in two additional manufacturing cells in the coming year. 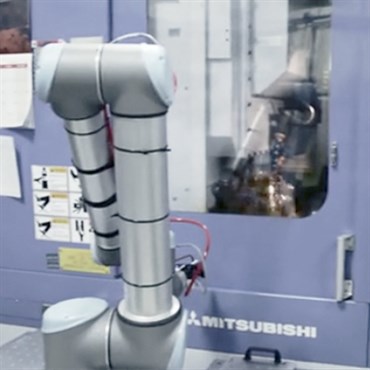 Similarly, RSS Manufacturing & Phylrich—a manufacturer of plumbing fixtures and faucet fittings in Costa Mesa, California—discovered Universal Robots while researching how to meet a large, fast-turn order of 700 valves. “Our CNC machine can normally do 400 valves per month with two shifts, so we would have been forced to buy another machine even if we put a third shift on,” said CEO Geoff Escalette. The company deployed a UR5 from Universal Robots and put it to work 24/7. The result: RSS Manufacturing & Phylrich met the order in just 11 days while opening up 30 percent more capacity on existing machinery.

Today’s lightweight, flexible cobots can be easily moved and reprogrammed to be used on a variety of CNC machines or to other processes such as gluing, welding, polishing, or pick-and-place. Easy programming means almost any manual task can be automated, including those with small batches or fast changeovers. And for recurrent tasks, UR cobots can re-use previously set programs to speed redeployment.

LEAX Group, a Swedish contract manufacturer, invested in three Universal Robots UR10 robot arms. Rickard Isaksson, quality manager at LEAX Group, said, “We manufacture everything from small annual volumes up to 100,000 units of a particular article per year. For us it is extremely important, as well as one of the company's strengths, that we are able to quickly execute orders for new products. We have very high requirements for how quickly we can start up a unit.” The ability to quickly reprogram the Universal Robot for new applications—or to move them to new LEAX sites—puts the company well ahead of the game. 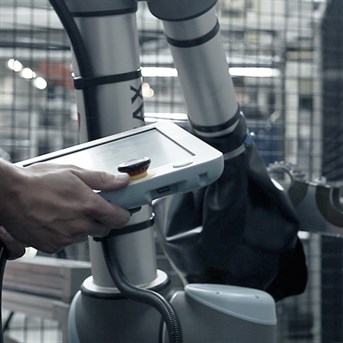 For all of these applications, Universal Robots let human workers safely move in and out of the robot’s work area to load or unload parts. When a human enters the robot’s work-cell, the robot arm can operate in reduced mode, with patented technology that limits force to avoid injury if the robot arm comes in contact with a person. The robot automatically resumes full speed when the worker leaves its space. Other options allow the robot to run full-speed inside a CNC machine and at reduced speed when outside. This is a dramatic change from traditional industrial robots that require extensive safety caging to keep human workers out of the robot’s work area while it’s in process, and that severely limits the robot’s flexibility.

Read more about how Universal Robots offers improved productivity, return on investment, and worker safety and satisfaction for a wide range of CNC applications.