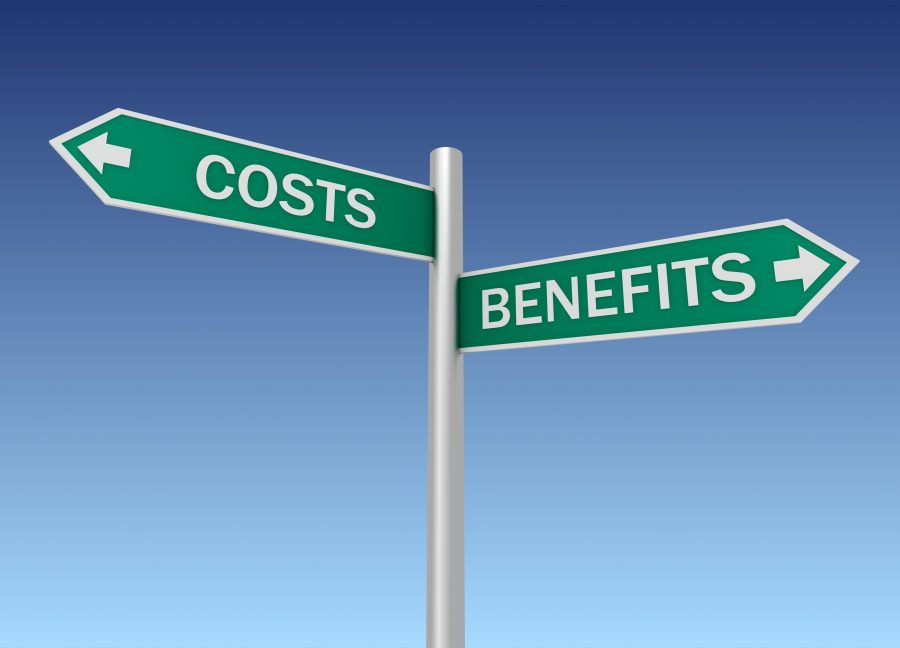 Unlike most human workers, industrial robots are content to do the same job over and over, for days and years on end. Not only that, robots do the job the same way every time, helping manufacturers increase production output and improve product quality and consistency.

Of course, the costs and benefits of industrial robot arm deployment must be considered in order to decide if the return on investment (ROI) meets your business requirements. The analysis must include the upfront robot cost, installation and maintenance. This includes integration with other machines and equipment, programming, peripherals (grippers or sensors, robotic arm controllers) and any safety-related retrofitting.

It is also important to gain a thorough understanding of all the elements of an industrial robot arm.

What is the most common manufacturing robot?

The first thing to explore is the difference between traditional industrial robots and modern collaborative robots. For decades, popular manufacturing robots were bulky, industrial machines that were mostly appropriate for large companies. The ideal application for a traditional industrial robot is a high-volume, relatively unchanging process. In fact, when most people think of manufacturing robots, they envision something like an assembly robot in an automotive factory.

Today, collaborative robots (cobots) are the fastest-growing segment in the robotics industry, leveling the playing field for small and mid-sized manufacturers who can now use cost-effective automation tools to compete, even with high-mix, low-volume production.

Low-cost industrial robot arms allow small or family-owned businesses to automate processes that were not cost-effective in the past. And while a collaborative robot can help manufacturers address labor shortages for undesirable jobs, they also increase productivity and competitiveness.

How much does an industrial robot cost?

The cost of integrating a traditional industrial robot into your plant can be tens or even hundreds of thousands of dollars. By comparison, the upfront costs of implementing a collaborative robot is well within the range of an equivalent factory worker’s annual salary.

When assessing robot cost, it’s important to scratch beneath the surface to consider all aspects of your industrial robot application, since what you see is just the tip of the iceberg.

The upfront industrial robotic arm price is just the tip of the iceberg.

For most manufacturers, the most important question is: “How long will it take for the robot to pay for itself?”

Let’s look at an example of how to assess robot arm cost – as well as other elements in the cost-benefit analysis. This will help you justify your decision before you buy a robotic arm. 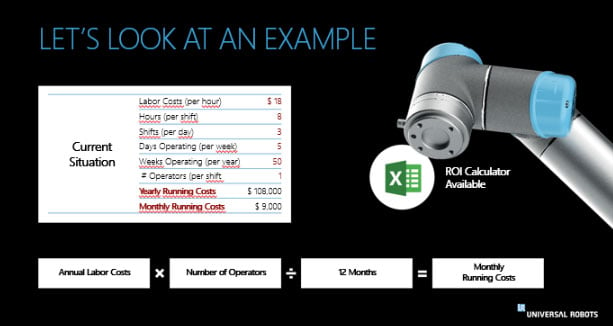 Example of how to calculate ROI for an industrial robot. 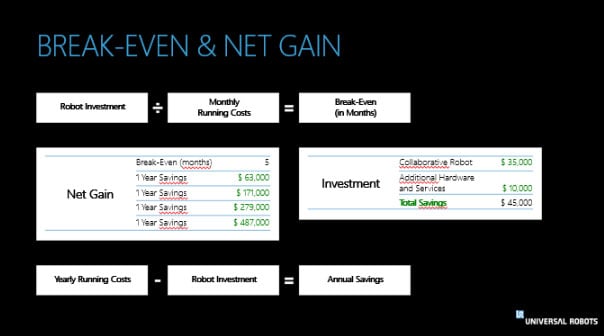 How to calculate robot break-even and net gain 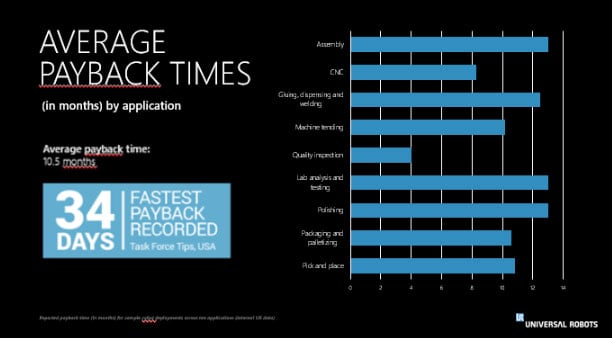