Team Universal Robots was the absolute rookie team participating in intense, qualifying rounds in Nevada. The new UR sponsored team, consisting of 12 handpicked high school students from all over Denmark, met tough opposition, formed alliances with other teams, and ultimately placed better than more experienced participants. The team is now creating a groundswell of interest in robotics among Danish youth. 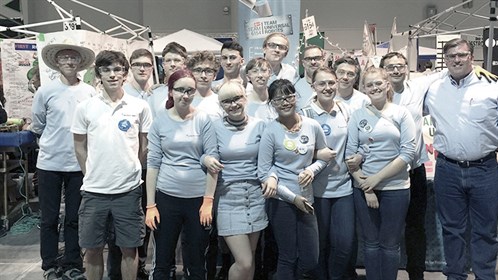 The global FIRST Robotics Competition has more than 70,000 participants from USA and Asia. Europe, however, is conspicuous by its absence with fewer than 100 contestants. Despite Denmark’s flourishing robot industry, the country had not had a robot talent team in FIRST before Team Universal Robots entered the arena in Las Vegas earlier this month.

The initiative was launched by RobotLab founder Lars Ringe in collaboration with the Danish Academy of Talented Youth with an investment of USD 75,000 from Universal Robots. The new team had only four months to build a robot to solve a long list of tasks, such as scaling obstacles, picking up and shooting balls. At the qualifying round in Las Vegas, the 12 Danish high schoolers were up against teams with decade long experience in FIRST, many with 50- 100 members on each team, with quite a few contestants already in college. Despite the odds stacked against them, Team Universal Robots ranked 12 out of 50 teams after the first rounds and ended up placing 40th overall. The result did not qualify the Danes to proceed to the finals in St. Louis later this month, but according to Lars Ringe, something much more important has been created:

“The amount of attention this team has created in Denmark - we saw a significant amount of media coverage, including appearances on national broadcast TV - has invigorated the interest in robotics among young people. This is just the first step. We’re now in a much better position to prepare our team, all members want to compete again next year. We’re also doubling the team now, recruiting 12 more participants. And let’s not forget; we were still able to beat nine very experienced teams,” concludes Lars Ringe, who is now busy expanding and improving the workshop in Copenhagen where Team Universal Robots soon will be joined by the new recruits.

With the sponsorship, CEO of Universal Robots, Enrico Krog Iversen, wants to lay the ground work for developing Denmark’s already unique position in the global robot industry and research even further:

“For us, it makes a lot of sense to take a far-sighted and long-term approach by investing funds and efforts in this initiative. We know it requires many different skills, a lot of resilience and sense of cooperation to be able to develop innovative robot technology that meets the needs of workplaces and society. These are also very important parameters for reaching the top at the FIRST Robotics Competition.”

The Confederation of Danish Industry (DI), the Innovation network RoboCluster, and the Danish Society of Engineers are also following the new robot team closely:

“There are currently hundreds of unfilled engineering jobs in Denmark and according to a forecast from the technology alliance ‘Engineer the Future’, Denmark will have a shortage of 13,500 engineers and scientists as early as 2025. If we do not meet this demand, it will impact our opportunities for developing robots and automation. Technological development has never evolved faster than right now, and if Denmark is not among the leaders, we risk endangering the welfare of our state as we know it,” says chairman of the Danish Society of Engineers, Frida Frost.

In 2016, more than 3,000 teams comprising 78,000 young people from all around the world will compete at the First Robotics Competition. In the first quarter, it is full steam ahead with preparations and regional competitions such as the one in Las Vegas. The final takes place in St. Louis, USA at the end of April 2016. http://www.firstinspires.org/robotics/frc