e-Series launches at Automatica, marks a decade of trailblazing cobots at the world’s largest automation fair 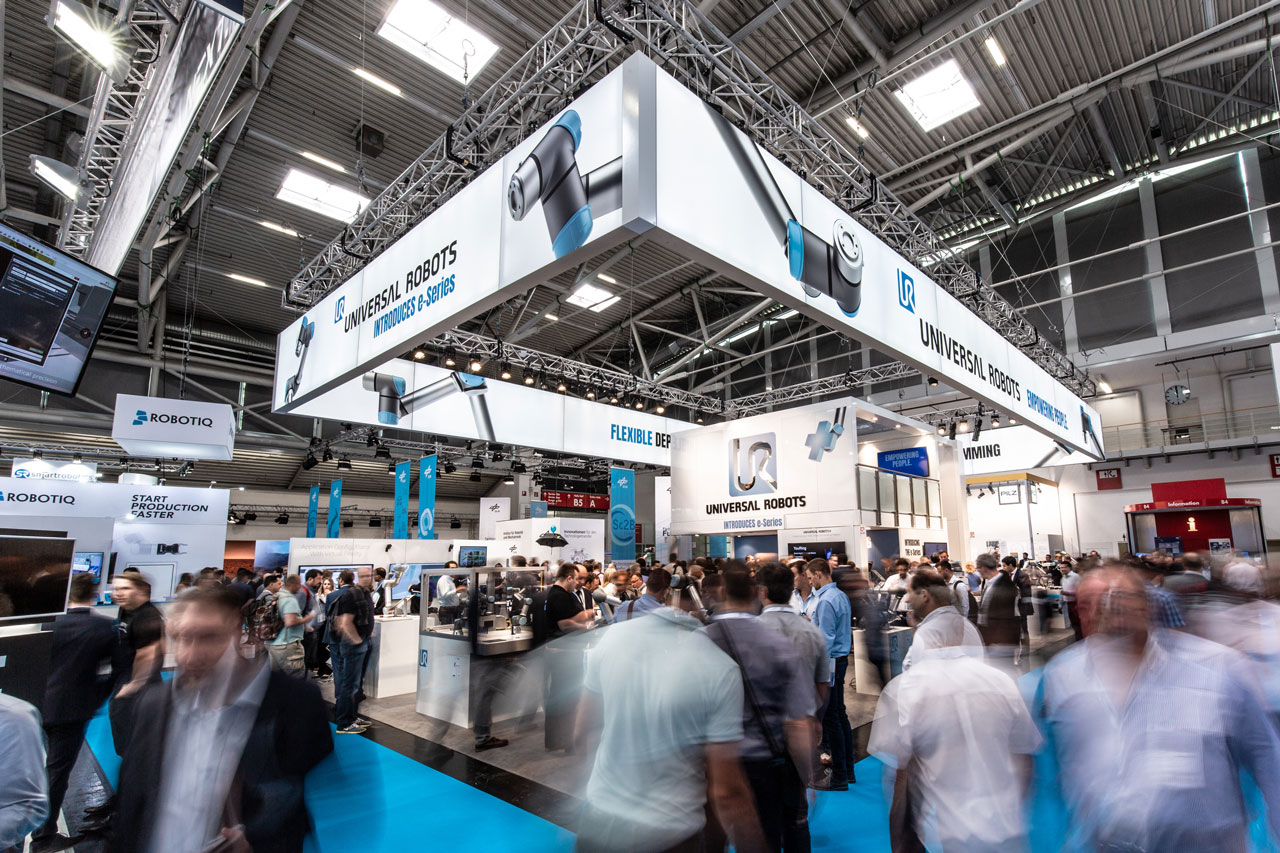 As CTO and co-founder of Universal Robots, Esben Østergaard, pulled away the black fabric covering the new e-Series cobot at last week’s Automatica fair in Munich, it not only introduced the world to a new collaborative robot line that enables faster development for a wider variety of applications. It also marked a ten year anniversary of the cobot concept being publicly exhibited as a commercially viable automation tool. Back in 2008, as Universal Robots’ modest exhibit opened at Automatica, Universal Robots was the first and only exhibitor to show robots operating outside of safety cages.

“The next day, we were on the front page of the “Messe Zeitung” (the show newspaper). That was really the moment we realized we were on to something,” recounts Esben Østergaard, who has seen his unknown Danish startup grow to become the global market leader, creating a paradigm shift in industrial robotics. His pioneering effort was awarded the Engelberger Robotics award, also known as the Nobel Prize of Robotics, at a ceremony hosted by Robotics Industry Association at Automatica.

This fascinating video portrait of Esben, documenting his lifelong passion for robotics and quest to change the world through cobots, introduced our CTO at the Engelberger award ceremony

The ‘e’ in the new e-Series stands for Evolution and underpins Universal Robots’ key vision and overall product philosophy of Empowering People and making it Easy for Everyone. With a new built-in, tool-centric Force/Torque sensor the e-Series is ready to take on applications requiring force control right out of the box, such as assembly, sanding, buffing, polishing and deburring where force-feedback is paramount in order to obtain uniform results. Additionally, the Force/Torque sensor can be used to measure mass and perform related inspection processes or precisely detect contact. A repeatability of 30 micron (0.03mm) in the UR3e and UR5e models and 50 micron (0.05mm) in the UR10e means the new cobots are suitable for very precise finishing, assembly and electronics tasks 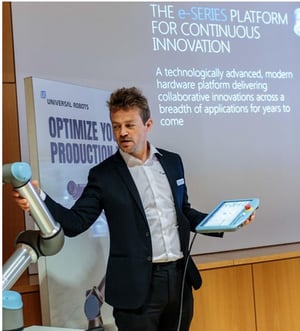 Esben at the reveal of the e-Series, demonstrating the ease of programming through a re-designed intuitive and responsive-touch user interface. The new UI decreases cognitive load and expedites program development by simplifying programming flow while reducing programming to a few clicks on a new lightweight, wide-screen Teach Pendant

The e-Series offers unparalleled convenience; it takes just one hour to unpack the cobot, mount it and program the first task. A new wrist-joint-tool communication interface reduces production line integration time and the hassle associated with routing cables between the end-effector and control cabinet. As the catalog and capability of UR+ end-effectors has grown so has the need for increased tool power consumption. To address this emerging need the e-Series platform tool power supply now supports up to 2A of peak current. The new cobot line also adds 4 additional digital inputs with an associated interface for use with conveyor tracking

UR5e takes the wheel with the UR+ gripper, qb Soft Hand Research, an anthropomorphic robotic hand based on soft-robotics technology able to interact with the surrounding environment. Nearly 50% of the certified UR+ products are compatible with the e-Series at launch date with the remainder planned for compliance by the end of 2018.

“End-users with complex applications and diverse or uncertain future needs will benefit from the e-Series platform and our unique Universal Robots+ ecosystem knowing that their investment will be able to grow with them as their needs change,” says President of Universal Robots, Jürgen von Hollen. “We enable innovative customers to rapidly drive adoption of automation technology into their businesses to maximize their competitive advantage.”

Universal Robots will start taking orders for the e-Series immediately and begin shipping units to customers from August 1, 2018.

Sign up here to join our upcoming webinar and get a Technical introduction on the new e-Series.

World Cup during Automatica – what to do? Attendees were able to experience both at the UR booth where the cobots rooted for their home country Denmark in the World Cup as the Danish team tied Australia 1-1.

How Manufacturing Automation Can Reduce Workplace Injuries and Improve Morale