Afraid to Commit? No Problem, with Flexible, Redeployable Cobots. 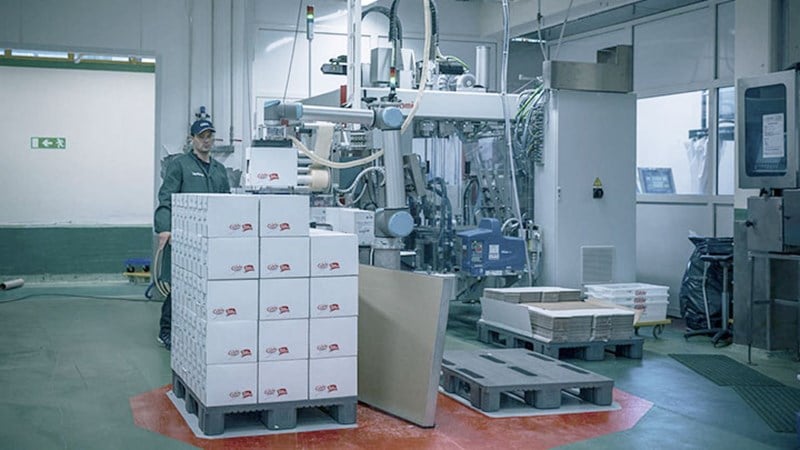 For some companies, making the commitment to robotics can be a little scary. Dedicated industrial robots are big, expensive, difficult to program, and require safety fencing and dedicated floor space that your operation may not be able to support. But new collaborative robots are lightweight, space-saving, and easy to redeploy and reprogram. All that comes with a return on investment so fast your commitment fears will be a thing of the past.

Lightweight and easy to move for a mobile robotic workforce
Collaborative robots (“cobots”) are lightweight—the largest Universal Robot, the UR10, weighs less than 30 pounds (just over 60 kg)—making them easy to move from one location to another on your production floor. The robot can be mounted in minutes, with no complex installation or set-up. And because collaborative robots are designed to work side by side with human operators (after risk assessment), there’s no need for expensive, bulky, and limiting safety guarding.

Matt Bush, then director of operations of electronics manufacturer Scott Fetzer Electrical Group in Tennessee, mounted collaborative Universal Robots on wheels to create a mobile robotic workforce that doesn’t need traditional safety enclosures. “When our workers come in in the morning, their task is no longer to do some monotonous task,” he explained. “It’s to go take the robot and deploy it to whatever job it needs to do that day.”

Injection molder Dynamic Group in Minnesota, used a similar strategy. Co-owner Joe McGillivray says, “We’re able to quickly redeploy these robots to completely new tasks in very short order. We have most of them—all of them actually—on bases that we can transport around on wheels and slide them from press to press and application to application. That’s been hugely beneficial to us.” 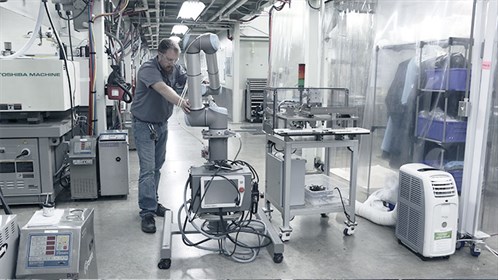 Optimize floor space with no safety guarding required
The ability to use collaborative robots without safety fencing and dedicated cells means you can optimize even small production floors. This was a challenge Norwegian meat producer Nortura faced. The company needed to optimize its palletizing application, but typical palletizing robots require a large fixed cell with safety caging that takes up extensive floor space. Nortura wanted to be able to palletize continuously without stopping the production line, but needed the flexibility of using the space for other processes if there were no pallets in place.

Robotics integrator Rocketfarm AS customized a vision system to complement the Universal Robots UR10 collaborative robot for an innovative, small-footprint approach. The robot is mounted on a narrow stand (only .5m2 in standby mode) with the camera mounted in the ceiling above. The robot’s working area is simply a painted space on the floor, which marks where operators place an empty pallet. “We used maybe 10 to 20 percent of the space that a traditional robot would have used,” Lars Bårdgard Åstveit, developer at Rocketfarm AS explains. “When there’s no pallet there, the space is free—it’s as if the palletizing system doesn’t exist.” 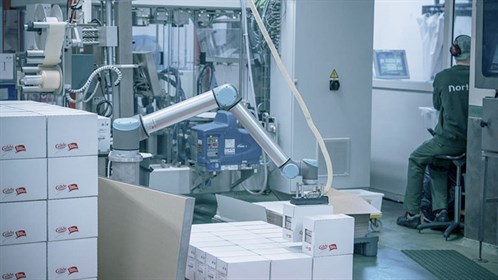 The mobility of the UR robots is in stark contrast to traditional industrial robots that usually stay bolted down in a safety cage, according to Dynamic Group CEO McGillivray. He is able to quickly redeploy the company’s UR robots to completely new tasks in short order. “Our employees are working directly with the robot; there is no fence in between. That’s a huge savings to us on time, needing to manufacture, and costs to manufacture those enclosures and of course floor space. We’re able to fit a lot more automation in a much smaller footprint.”

“A major impediment in the past to using robots was the security fencing required around the machine,” adds Stewart McMillan, CEO of Task Force Tips, an Indiana-based manufacturer of firefighting equipment. “The beautiful thing about the UR Robots is you don’t need all that guarding. We can roll the table with the robot right up to the machine and in a few minutes teach the robot to load parts.”

Dynamic Group CEO McGillivray says, “All the robots are on bases that we can transport around on wheels and slide from press to press and application to application. The fact that we can quickly reprogram and redeploy these robots enables us to effectively address our high mix/low volume challenge.”

And Task Force Tips production supervisor Cory Mack recalls how within literally minutes of the Universal Robots’ arrival, his colleagues were already figuring out how to program it and make it work. “The Universal Robot is so simple and non-intimidating that our programmers were already in the mindset of ‘I don’t need any guidance, I can do this on my own.’ It was almost like a PlayStation video game where they could pick up the controller and figure it out without reading the rules to the game.”

Cost-effective, with the fastest payback in the robotics industry
The flexibility of collaborative robots—with none of the traditional added costs for programming, set-up, and dedicated, shielded work cells—means that robotic automation is finally affordable even for small and mid-sized companies. Universal Robots have an average payback period of just 195 days. That’s in stark contrast to dedicated industrial robots.

Task Force Tips CEO McMillan recalls buying the company’s first CNC machine forty years ago. Those robots were dedicated to working only on the machine they were installed with and could not be redeployed to other tasks. “So what happens is the machine wears out first and now you have a $100,000 robot that you can’t do anything with. We had heard of collaborative robots that could be used in a much more flexible manner, so we decided to explore this new technology.” Task Force Tips has now installed four collaborative Universal Robots—and the savings resulted in a return on their investment in only 34 days.

And Dynamic Group’s fast-paced and high-volume kit assembly application required six to seven employees at once. CEO McGillivray explains, “It wasn’t sustainable. Now we’re able to run it with as little as two people. Having this type of success out of the gate as first time rookies at this stuff has been phenomenal and totally unexpected. Our return on investment was less than two months, and we can even go further because we’re able to adapt the robots to other products so quickly.”

The moral of the story? Don’t be limited by dedicated robotics. Collaborative robots will help you put your automation commitment fears aside.