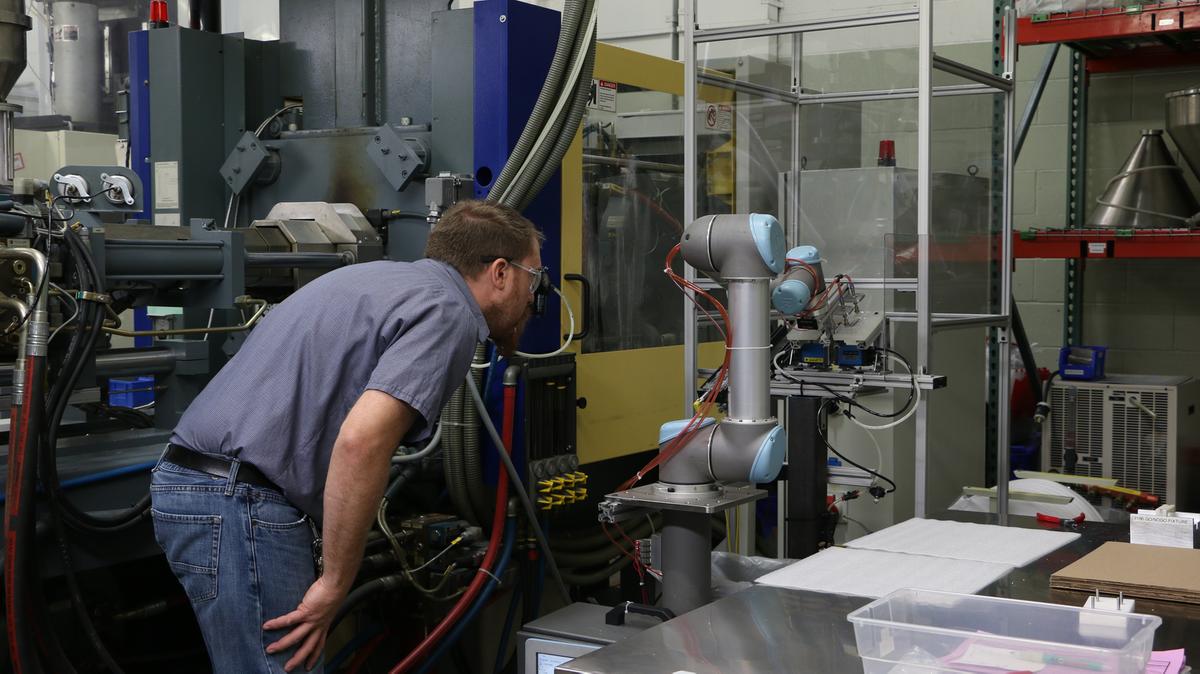 It’s been 10 years since collaborative robots appeared on the manufacturing scene. First viewed as a lab experiment by global manufacturers that would buy one or two, send them off to their innovation centers for testing never to be seen on the production floor, cobots now are hard at work in many sectors all around the world.

For small and mid-size manufacturers that don’t have an army of automation engineers, cobots are a dream come true. These companies can especially be hard hit by labor shortages, economic volatility and competitive pressures, so the ability to deploy cobots without major investments in time, talent and money is a game-changer for many.

What I hear when I talk with these companies most often is: “how can I get started?” Each company is, of course, different, but there are some things I recommend that manufacturers look for when considering where cobots can be put to work. Watch your people at work. What you see will help you identify work that is ideal for automation with cobots:

Where are people waiting for some aspect of the task process to be completed?

Any time a person if standing around waiting for a process to be complete before they can move on to the next step, is time – and money – wasted. 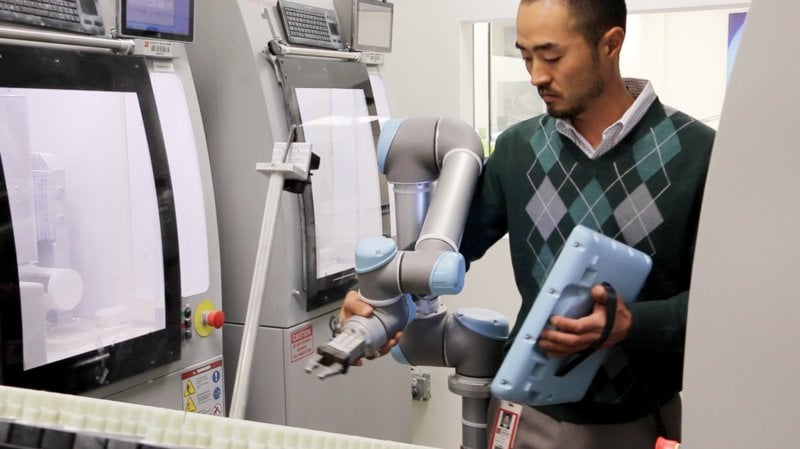 Glidewell Laboratories in California makes dental crowns in a milling cycle lasting ten minutes, which meant it was unfeasible to have an operator stationed at the machine. The company has now deployed UR cobots in cells where each cobots tend four milling machines, decreasing the production-cycle time from 27 to 18 hours, saving two milling operators per shift.

What tasks are clearly too simple for people to be wasted on?

Think things like putting parts into a box, tending to a CNC machine, transferring parts from one line to another, inserting screws, loading/unloading a rotary indexing table. If a cobot can do it, why wouldn’t you give the person something more valuable to do.

At injection molding company BTC Mold in Taiwan, UR cobots saved over 35% of labor cost, solved a serious manpower shortage, and significantly reduced the risk of occupational hazard in the factory. Instead of repeatedly bending down to pack the finished products, the employees can now program the cobot to do it for them.

What tasks can be unbundled or has many sub-tasks?

I’ve seen instances where the steps in a task are assembled into a start-to-finish model as a way to make the work less boring, but the fact is that a string of boring tasks is likely to still be boring.

Look for tasks where the person today is doing one or two things. Unlike people, robots use ‘hands’ that are typically good at one or two things. Asking the robot to do more tasks can sometime require the robot to switch hands, which can be done, but adds cost and complexity. One example of a typical two-step task requires taking a part out of a machine and inspecting it.

At Creating Revolutions in Miami, a UR3 cobot carries out several steps in the production of service pagers for the hospitality industry. The cobot deftly handles both drilling, soldering, silicone dispensing and light assembly, enabling the company to reduce rejects to near zero while increasing production efficiency almost five-fold.

Which employees are not smiling?

If a person’s expression or body language reflects boredom, frustration or apathy, it’s a good bet that you aren’t taking advantage of the potential they have to add real value to your process. 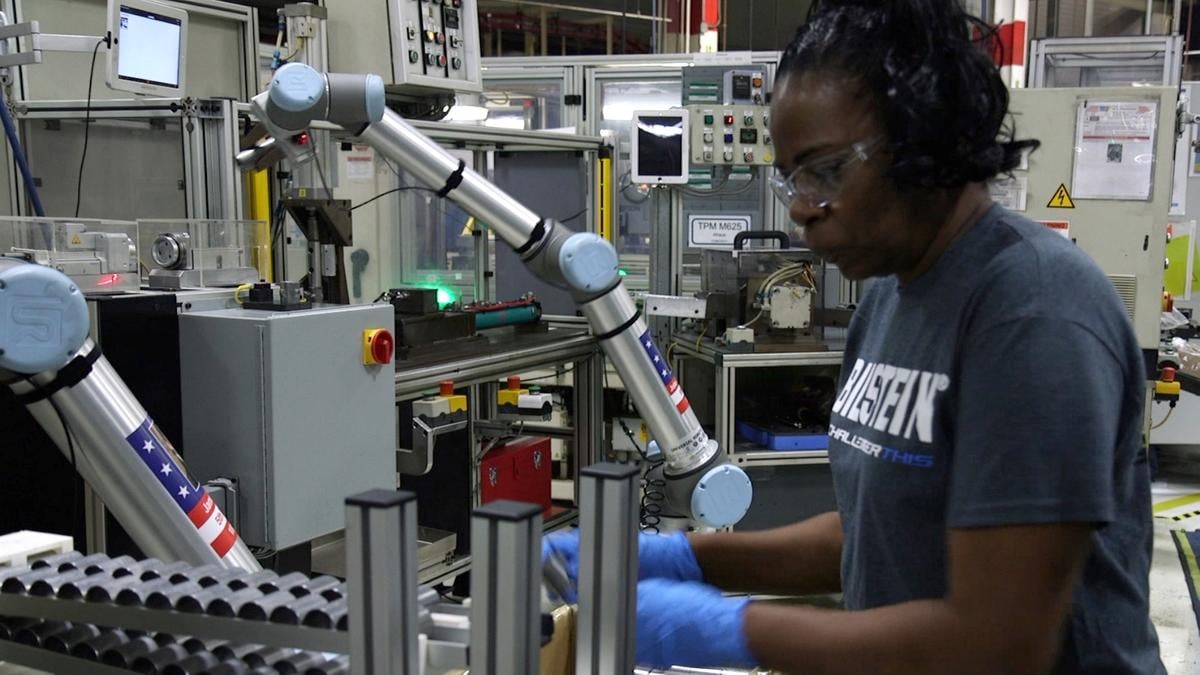 At thyssenkrupp Bilstein in Hamilton, Ohio, the cobots were welcomed by operator Quenna Quarles, who used to handle the machine tending tasks now automated by UR10 cobots. “I had a lot of aches and pains in the past, constantly having to physically punch that, move this,” she says. “Now we can flow much better production-wise and my job is easier as I just load the tubes and let the cobots take care of the rest.”

What is the person doing with their hands?

People have amazing hands that can do a great many very complicated things. Robots are not so lucky. Many robots use simple vacuum suction cups to pick something up or two-finger grippers to grip a part like you or I might hold a glass of water. If the task requires finger dexterity, it’s not a good candidate for automation with cobots – yet. 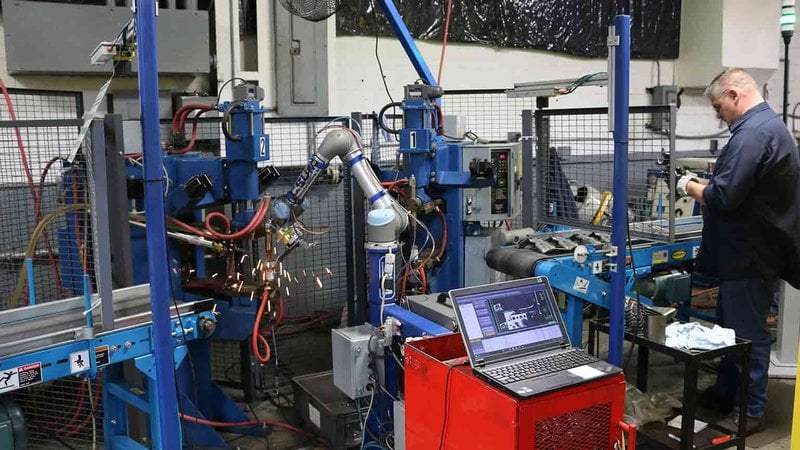 Loading and unloading parts into resistive welders was not a sought after jobs amongst the operators at T&W Stamping in Ohio. The company deployed a UR10 in the welding cell which freed up operator to work on more complex tasks, resulting in 40 percent efficiency increase.

Cobots have a lot to offer. If you are wondering if automation could help you increase productivity, improve quality and lower costs, start by walking your production floor and observing your employees at work. It will tell you a lot about where and how to get started, I guarantee it.

What do you see when you watch people at work? What kinds of tasks have you found might be better for a cobot?

January is National Cobot Awareness Month. If you get a cobot now, it could pay itself back before end of the year. Get in touch with us today and learn more: http://urrobots.com/awareness

Experienced in both start-up and Fortune 500 environments, Jim’s career has focused on building organizations that give manufacturers new and effective ways to capitalize on the intersection of technology and business performance. From early days in e-commerce market and supply chain optimization to supplier risk management, Jim has been on the leading edge of innovation that changes what world-class manufacturing looks like. Since 2013, Jim has focused on the opportunity for manufacturers to harness advanced automation and collaborative robots to transform their operations and how the world thinks about work. He joined Universal Robots in 2018 and today leads the product and applications management of the company’s advanced collaborative robots to manufacturers and distributors all over the world. Jim holds a BS in Electrical Engineering from Tufts University, an MS in Electrical Engineering and Computer Science from MIT and an MBA from MIT’s Sloan School of Management, where he was an inaugural Fellow in the MIT Leaders for Global Operations (LGO) program.