It is not all about the future: It’s all about reality. Discussions about whether industry 4.0 is a vision for the future have ebbed away. Everyone agrees that it has long since become a reality – At least in theory. Lots of small and medium-sized enterprises are yet to implement automation. At Universal Robots we in fact envision - and argue - that companies should look at Industry 5.0 where man and machine work together. This will benefit both SMBs and larger corporations

At this year's “Hannover Messe” in Germany, Universal Robots is presenting a realizable reality and is placing the event entirely in the sign of the enlightenment in Hall 17, Stand B 32. Practical examples show how flexible, simple and individual the UR cobots can be used for every requirement and application.

Fair visitors will see for themselves how the UR+ platform enables 'Plug-and-Produce’ by offering access to a constantly growing number of grippers, sensors, software and additional accessories, all of which are guaranteed to be implementable via direct software integration on the UR robot’s teach pendant. This reduces installation time and costs for automation solutions and consequently makes them a realistic option – also in small and medium-sized companies.

Hands-on demos at the UR booth

Show, tell and try
It is all about collaborative teamwork: At the fair Universal Robots will be showing three UR3 robots that collaborate to screw flashlights together, insert a battery, and subsequently use a laser to label the lamps. In another application with a UR5 and an ATI force-torque sensor, visitors can witness the robot's "perceptual capacity": The robot arm drives along a line on a plate with a strongly wavy surface. The visitor can move it and see how the robot always follows the stipulated contour along the uneven structure, an important condition, for example, for bonding processes or deburring. 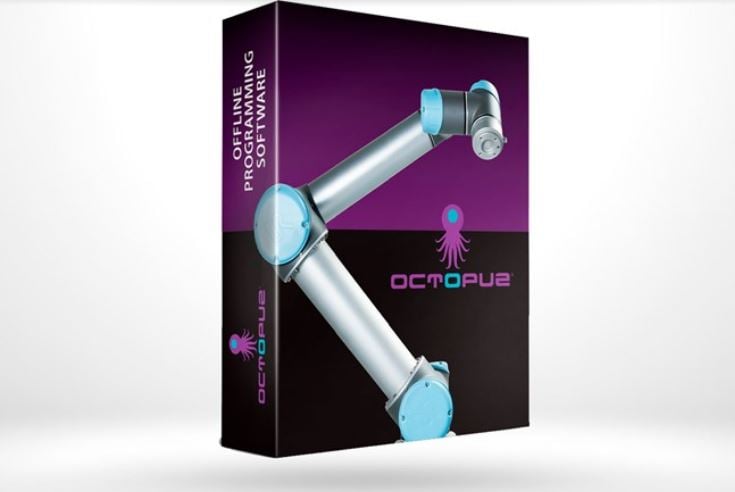 Hannover Messe will feature the UR+ enabled Octopuz software in a live demo, catch  our recent blog post featuring a case study on how the software helps remove bottlenecks in the production of cushion fillings at UK manufacturer Fibreline

Furthermore, trade visitors can also use software from Octopuz offline to program their own applications, and then have the results transmitted to a UR robot for a live demonstration. A palletizing application rounds out the UR fair presentation: The case study is particularly interesting for representatives from the logistics and packaging sectors, who are increasingly discovering the advantages that collaborative robots offer.

See what true collaboration looks like
In addition to Universal Robots’ own presentations, its partners will also be offering demonstrations at this year’s Hannover Messe to show how simple automation can be. For example, numerous additional application examples involving UR+ products can be seen at the stands of ArtiMinds Robotics, Blue Danube Robotics, igus and LEONI protec cable systems.

Some facts about “Hannover Messe”
The “Hannover Messe” is one of the most important industrial fairs worldwide and takes place annually at the world's largest exhibition center in Hanover, Lower Saxony in Germany. In 2017, the fair attracted a record 225,000 visitors, of which more than 75,000 were from abroad.

How Manufacturing Automation Can Reduce Workplace Injuries and Improve Morale

Welcome to the Age of the Cobots