Hey You, Robot – What’s Your Name?

When a new employee is hired, his or her coworkers’ first question is typically, “What’s your name?” After all, they’ll be working closely together, often side-by-side, sharing tasks and collaborating to meet company goals.

Why should that be any different just because the new coworker happens to be a machine?

Okay, when companies bring a collaborative robot on board, workers may be a bit skeptical at first. They may be nervous that the robot will replace them, or they may worry about their safety or whether they have the technical skills to operate this newfangled machinery. But what we hear over and over from our customers is that those worries quickly disappear. And in many cases, the “new guy” on the production floor is given a name by its friendly colleagues.

The traditional approach: Johnny 5 and HAL 9000

In fact, naming the new cobot colleague is recommended by Matt Bush, COO of robotics rental pioneer Hirebotics. Matt emphasizes that employees are key stakeholders in the success of any automation initiative and provides recommendations for companies to smooth the transition and ease employee apprehension. Robot names such as Johnny 5 (from the 1986 film Short Circuit) or HAL 9000 (from 2001: A Space Odyssey) might be the first ideas to comes to mind, but in presentations and interviews, Matt encourages employees to get creative in naming their cobots. 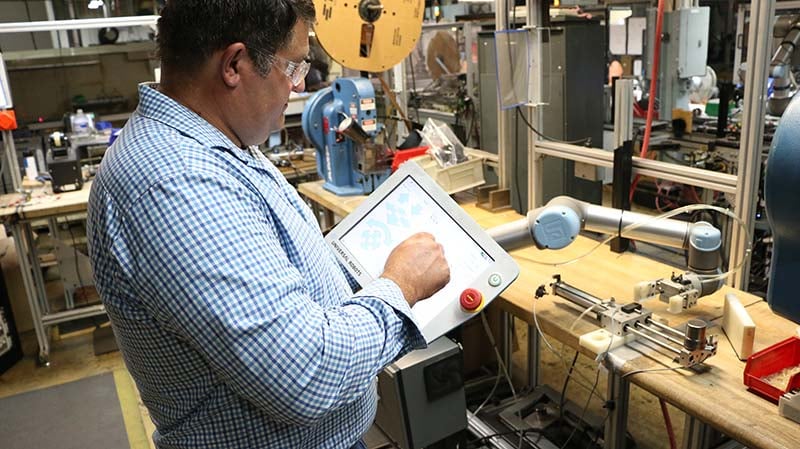 Waldo deployed in a prototype application at SFEG. The robot is placed on wheels and can easily disappear to pop up in a new place surrounded by people.

Scott Fetzer Electrical Group (SFEG) in Tennessee manufactures a range of electrical motors and components. When the first UR5 robot arrived at SFEG, it was quickly named “Waldo,” inspired by the popular “Where’s Waldo” children’s books that feature a friendly fellow who keeps appearing in new places among crowds of people.

Mounted on a wheeled pedestal for easy movement, cobot Waldo can be found almost anywhere on the production floor, managing a wide range of tasks. One day Waldo would be bending sheet metal, the next day he would be performing pick-and-place tasks, and the third day SFEG would take him to Manufacturing Day at the local high school. Waldo was even given a red-and-white striped shirt to wear, like its namesake.

A kinder, gentler Thelma and Louise

A couple of Waldo’s cobot colleagues were jokingly named Thelma and Louise based on workers’ early worries that the robots would drive them off the proverbial cliff. “When the robots first came out on the floor, employees were very anxious as they thought they would be replaced,” explains Line Lead Sebrina Thompson. “But the robots handle a lot of tedious tasks for us now, enabling us to focus on more challenging jobs. My colleagues are constantly trying to find out where we can put the next robots.” 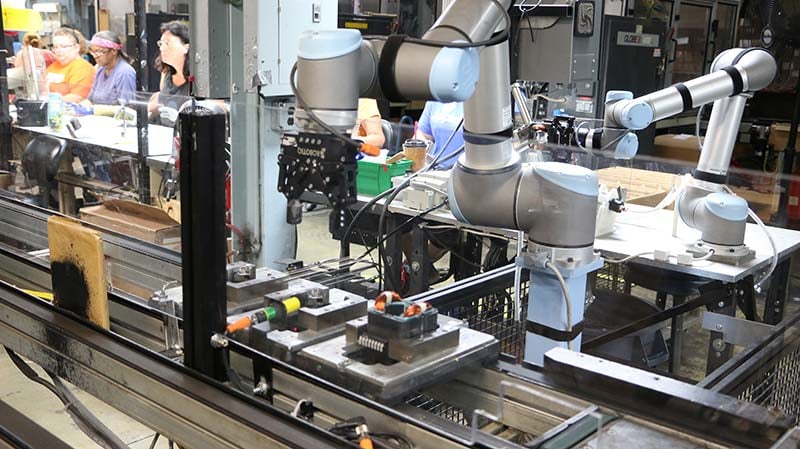 The iconic movie “Thelma & Louise” - that ends as the protagonists drive off a cliff - inspired the naming of two new UR robots at SFEG in Nashville where workers feared the end was near as their cobot colleagues arrived. The SFEG scenario turned out quite differently.

ASSA ABLOY in New Zealand is part of ASSA ABLOY’s global business which specializes in door-opening solutions including locks and access controls. When the UR5 robot was introduced, the lock bodies team had a naming competition and so Victoria was christened. “With this, Victoria becomes one of us – she’s like another co-worker,” says Marc Simkin, Manufacturing Engineer Manager at ASSA ABLOY NZ.

Before Victoria arrived, workers at the lock-assembly process were rotated every two hours due to the demands of repetitive wrist and shoulder movements. By automating the final step on the lock bodies production line, Victoria has relieved operators of work hazards and allowed them to take on new roles focused on quality and process monitoring of material supply. “We’re so pleased to see the team’s sense of pride in the new skills they’ve developed as a result of operating Victoria. Permanent staff have taken on the responsibility of mentoring temporary staff on how to work with Victoria,” said Mataio Goding, Production Manager, ASSA ABLOY NZ. 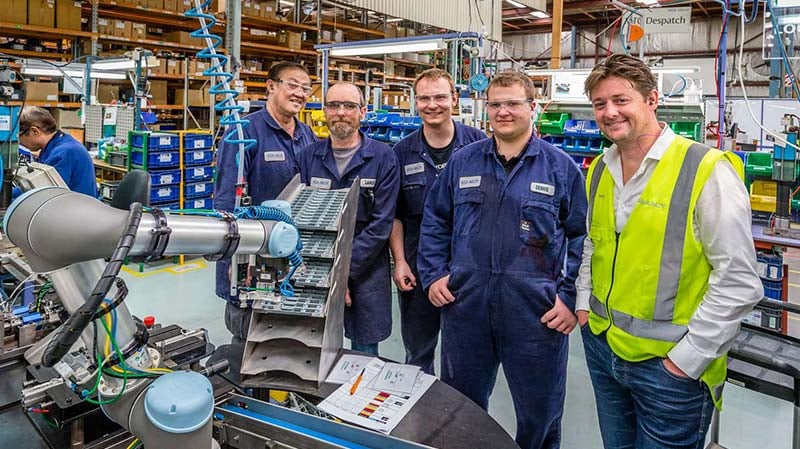 The ASSA ABLOY team in New Zealand with their new colleague Victoria, who has taken over their most tedious, repetitive jobs.

Junior takes on the big boys

The automotive industry is highly automated with large, traditional industrial robots, but there was still some apprehension when a new cobot arrived to help automate what are typically manual assembly processes. PSA Group, Europe’s second-largest car manufacturer, installed its first collaborative robot in its Sochaux, France facility as part of the company’s “Excellent Plant” initiative. But even with its robotic experience, PSA Group experienced much faster implementation than expected with the easy-to-use cobot.

It took only a month for PSA Group engineers to program the easy-to-use robots, and the entire integrated screw-driving system was implemented throughout the Sochaux site in only eight months. Maryline Bianchi, operator at PSA Group says, “I got so used to working with the robot to the point where, now, the crew calls it “Junior"!” 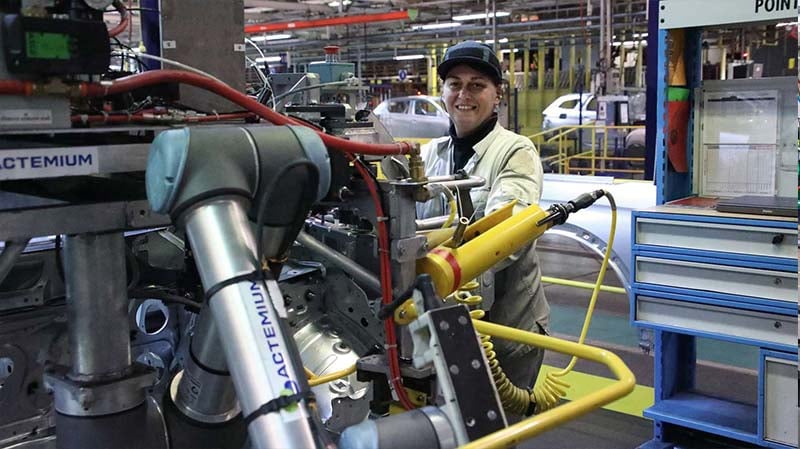 Maryline Bianchi at PSA Group in France with her new colleague “Junior” who now saves her from many back bending tasks.

With close to 25,000 UR robots deployed around the world, we’re sure there are lots more creative names. What’s your robot called?

Want to get more insights on how your cobot colleagues are performing? Download our new ebook on the Top 5 Cobot KPIs now: