Inventor of the Robot Arm and Its Continued Development

Who invented the first robot in the world?

The word “robot” was popularized nearly a hundred years ago by a Czech playwright in a hit 1920s play. The origin of the word robot came from an old Slavic word, rabota, that referred to forced labor or servitude. In the play, a company called Rossum’s Universal Robots (R.U.R.) used biotechnology to produce artificial workers—a far cry from today’s mechanical robots. While the play was popular, it took more than 30 years for the first true robot invention in 1954. In the patent application for his programmable robot arm, George Devol described it as a “Programmed Article Transfer,” referencing the device’s ability to be programmed to move materials.

The history of robots might have been dramatically different if not for a fateful meeting. At a cocktail party in 1956, George Devol and Joseph Engleberger discovered a shared excitement for science fiction and entrepreneurship. This started them down to becoming business partners – dramatically changing the future of robotics.

Engelberger is widely recognized today as the Father of Robotics. He guided the transition to using the term robot and to driving its use in manufacturing to perform tasks that were dangerous for humans

Joseph Engelberger on the left, George Devol on the right, c 1960.

When was the first robotic arm built, and for what purpose?

The first robotic arm, which Devol and Engleberger called the Unimate #001, was made in 1959. In 1961, Devol was awarded a patent for his robot invention and he and Engelberger established the world’s first robot company, Unimation—an abbreviation of the term “universal automation.” The first robot was installed at a General Motors plant in New Jersey to assist a hot die-casting machine. Unimation went on to develop robots to assist with welding and other applications in the fast-growing automotive industry. By 1966, Unimation granted licenses to Nokia in Finland and Kawasaki Heavy Industries of Japan to manufacture and market the Unimate, expanding the use of programmable robot arms into a global market.

Why was the first robot invented?

While the first robot was invented as a general-purpose machine to move materials, Engelberger and Devol recognized the device’s value to manufacturing. The automotive industry is still the largest market for robotic automation, but other industries - including electronics assembly; life sciences; food and beverage; and metal and plastics manufacturing are rapidly deploying robots as part of a push towards automation.

Engelberger was also interested in the many ways that robots could be used in service of humanity. For example, he was especially interested in how robotics could be leveraged in the service industries and healthcare.

Traditional robots are heavily utilized in manufacturing environments. Although, collaborative robots (or “cobots”)—are now the fastest-growing category of programmable robotic arms. This new category, pioneered by Universal Robots in 2008, has forever changed the history of robots. Thanks to innovations in automation safety, robots are no longer isolated behind safety caging. Robots, for the first time, are now working in direct collaboration with human workers.

With rapid and continuous growth of 50% to 100% per year, Universal Robots is the established cobot market leader. 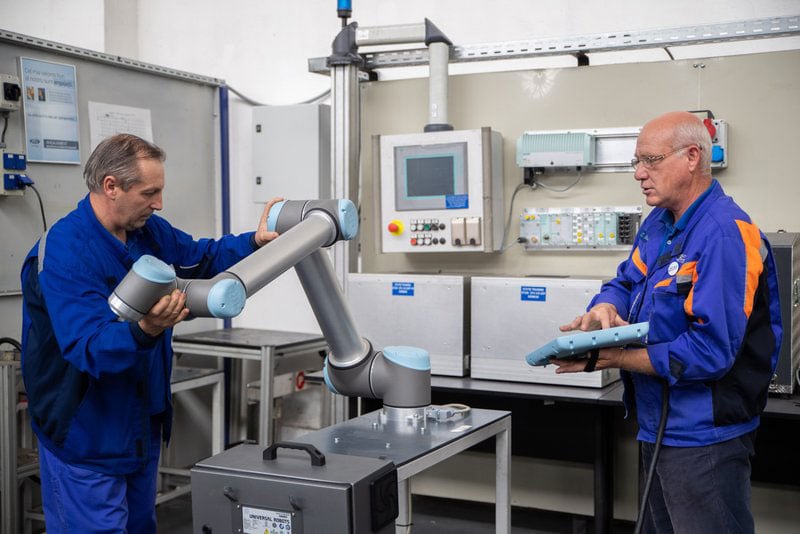 The UR10 collaborative industrial robot arm

Collaborative robot arms differ from traditional industrial robots in several critical characteristics. Each type of robot has advantages and disadvantages, depending on their use. For instance, traditional industrial robots are typically large, fixed equipment that run at high speeds with extremely high precision to automate large-volume, unchanging production lines.

These robots are usually complex to integrate and program, but once installed, require minimal human interaction. Collaborative robots are smaller, lightweight, and flexible automation tools that are easily programmed, even with no previous robotics experience.

Collaborative robot arms can easily be redeployed to support low-volume, high-mix production. They are designed to work alongside human workers in production applications that combine repetitive tasks (ideal for automation) with more complex tasks (requiring human dexterity and/or problem-solving).