In our modern interconnected world, no technology lives in a vacuum.  This holds true for the cars we drive, the phones that live in our pockets, and the robots that power our factories.  By opening products up to the power of the masses, companies realize potential in their products that they themselves never could have dreamed.

When Steve Jobs walked out onto the stage in 2007 and showed the world the very first iPhone, it turned the phone industry on its head. Not because of the sleek design, the seamless glass screen, or the unsettling lack of a hard keyboard.  No, the incredible value didn’t arise from the bells and whistles on the product that came in the box; it was instead from the expansive ecosystem that Apple would build around the iPhone in the years to come.  It is this same mentality that has made Universal Robots successful in the robotics industry, and it is especially true of the e-Series now celebrating its one year anniversary of first shipping to manufacturers worldwide.  Over the last year, UR’s new flagship line has proven it is greater than the sum of its feature set because it is a platform for seamless third-party integration through the UR+ platform, which enables real-world application solutions by novice users. 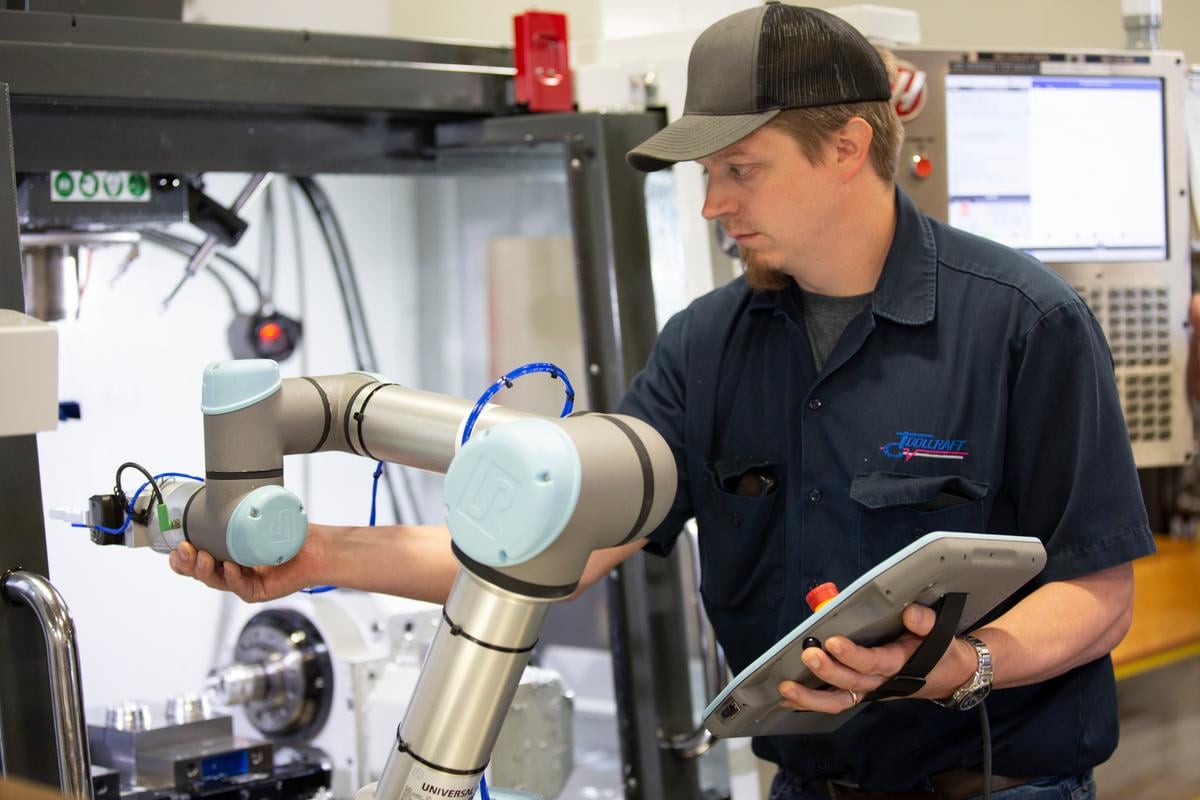 With the UR5e cobot tending the CNC machine, Toolcraft, a small machine shop with no prior robotics experience, was able to finish annual production seven weeks sooner than with manual labor.

Like Apple, Universal Robots set out in 2014 to build an ecosystem around its already successful earlier generation cobots by allowing 3rd party accessory developers to create “URCaps” which would plug-and-play with their cobot; simplifying setup and expanding application capabilities for end users.  Last year, with the launch of the e-Series, for the first time we saw a robot that was built with this kind of open development in mind from its inception.  This next evolution in UR’s cobots was specifically developed as a platform with a strong emphasis on enabling the growing ecosystem of UR+ products, that today encompasses 195 products with more than 400 companies in the developer program.  While the changes in the new e-Series line compared to the previous generation aren’t visible to the average user, much happened behind the scenes in order to empower greater development, design, and integration by third-parties – including the controller’s industry-leading 500Hz update rate with Real Time Data Exchange server, built-in force/torque sensor, and expansive kit of developer tools which are found nowhere else in the robotics industry.

More than 200 cobot experts, partners and end users from around the world came to the fourth annual Robotiq User Conference in Quebec earlier this month to hear the latest trends and discussions about collaborative robotics – and to witness hands-on the seamless integration between UR cobots and Robotiq’s rapidly expanding UR+ product portfolio.

As I alluded to in the beginning, no technology lives in a vacuum – and there is perhaps no better example of this than Robotiq, a leading robotics tools provider that has found a thriving place in the Universal Robots ecosystem.  While sitting in the audience at the fourth annual Robotiq User Conference (RUC), I had the chance to ponder how influential the bustling ecosystem surrounding e-Series has been on its success.  Nowhere else in the world can you find hundreds of people gathering at an event hosted by a third-party developer of robot accessories.  This level of interest stems not from the technology that Robotiq puts into its products, but instead the buzz is around the application possibilities that those products unlock for Universal Robots.  We saw new capabilities centered around applications like CNC tending, Sanding and Finishing, Quality Testing and Assembly – all designed to make these processes easier for the robot novice to tackle. 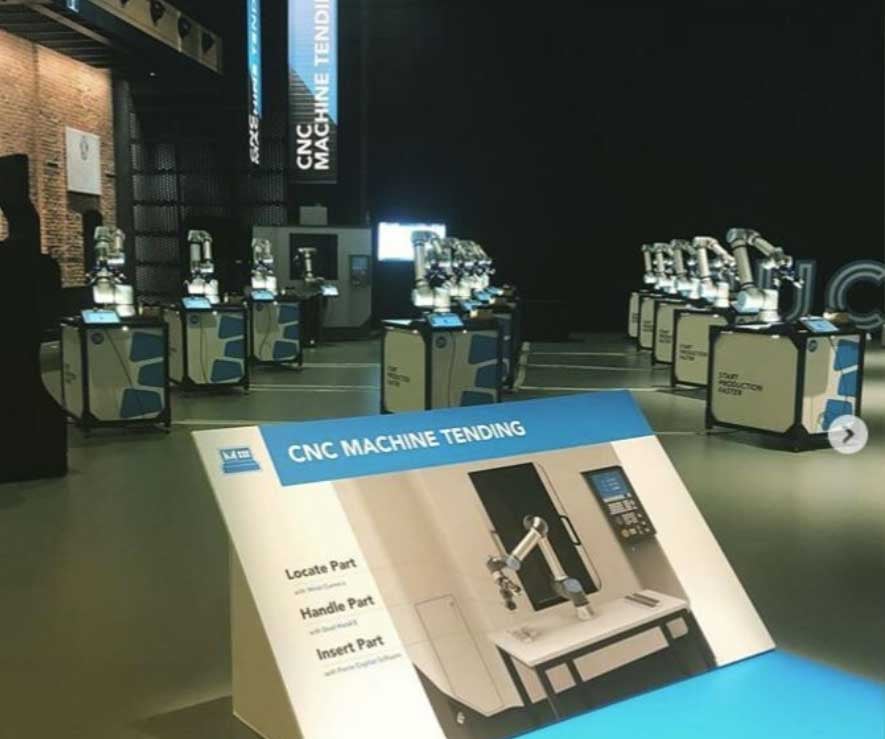 At RUC Universal Robots contributed no less than 54 cobots for attendees to interact with and demo UR+ products on. The cobots were equipped with Robotiq’s complete product family, including adaptive grippers, vacuum grippers, camera technology, force sensors, and related software – that now also includes a new application kit for CNC tending.

Pragmatic users only care about features so long as they help them accomplish their goal.  When you listen to an end-user talk about their robot application, you hear about what job the robot is doing.  You will often hear about the benefits that automation has brought – cost savings, ergonomic improvements for employees, quality increases.  Carlos Han, staff manufacturing engineer at medical device manufacturer Smith & Nephew told the audience at the Robotiq User Conference “If you had a human being doing this [operation] 8 hours a day, you can see how repetitive that will be, and how ergonomically unfriendly it is. By having the robot, I can have our skilled operators and finishers do something value-adding, instead of just deburring the drills all day long.”  The story you hear is about how the UR deployment has helped the people in his company – not about how the new catalog specs knocked his socks off.

Where will the e-Series be in another year?  If the world continues to embrace the UR+ platform, and use its tools to hone in on solving the world’s manufacturing problems, the sky is the limit.. Steve Jobs said it best to the Rolling Stone in 1994: “Technology is nothing. What's important is that you have a faith in people, that they're basically good and smart, and if you give them tools, they'll do wonderful things with them.” With these tools focused on the real work that people need to do, I think we can only imagine today the ‘wonderful things’ people will dream up to do with them.

Ryan Weaver has been helping companies in New England automate since he joined distributor of UR cobots Axis New England back in 2010 after receiving a degree in Mechanical Engineering from Worcester Polytechnic Institute. Axis New England has been deploying Universal Robots since they debuted in the USA back in 2012. As the Robotics Manager, Ryan leverages a breadth of practical application knowledge to help Axis clients select and deploy robots quickly and efficiently. He and his family live on the North Shore of Massachusetts where they are kept busy (and entertained) by their 3-year-old daughter.