Industry 5.0: The Factory of the Future

While there is a global movement built around creating smart, connected factories of the future, a new trend towards putting the human touch back in production is transforming the manufacturing process.

Picture this: Robots brandish the tools and perform all tasks while human workers oversee operations. Supported by smart technology, humans and machines collaborate simultaneously on the factory floor.

Believe it or not, this kind of futuristic scenario is already taking place in factories across the world.

This phenomenon, referred to as “Industry 5.0” or collaborative industries reflects a growing view amongst manufacturers of the need to respond to increasing demand amongst customers for a higher degree of individualization. In fact, 85 percent of manufacturers consider the “connected workforce” - that is robots and humans working together being routine in manufacturing by 2020. Moreover, an overwhelming majority of manufacturers now describe it as an essential element in their business strategy. 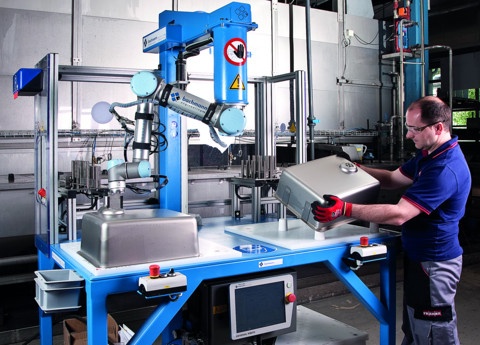 Swiss kitchen manufacturer Franke wanted to streamline its production of kitchen sinks to reduce costs and boost competitiveness. With a UR5 robot now handling repetitive glue dispensing tasks, employees can add value to other steps in the production process

The benefits of a collaborative man and machine workforce

While robots are excellent at manufacturing standard products in standardized processes in a high production volume, customizing or personalizing each and every product can be a challenge where robots will require guidance. Hence, maintaining the human touch within production processes is critical.

In production processes, automation can be used to its fullest potential only when there is a spark of human creativity influencing the processes. On its own, an automated production with traditional industrial robots will do only what it is being told - often only after long and strenuous programming efforts. Collaborative robots or “cobots”, however, work in sync with human employees. In this situation, man and machine complement each other, as the human can be responsible for customization, while the robot processes the product or prepares it for human attention. In this way, the employee is empowered and uses the cobot as a multi-functional tool, as with a screwdriver, packaging device or palletizer. 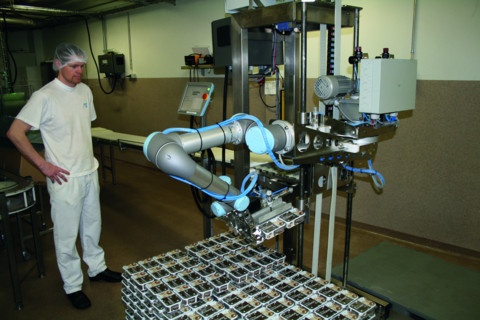 A report into skills gaps by Deloitte suggests that in the next decade, there will be 3.4 million jobs with only 1.4 million qualified workers to fill them. Robots are perfectly matched for many of these roles and cobots in particular can work side-by-side with human workers. Cobots are useful because they can take over mundane, repetitive and dangerous jobs while human workers move into higher-value positions.

The biggest threat to job security is the failure of a business to remain competitive. Automation offers companies a competitive advantage through higher and more consistent product quality, greater output and lower overall costs. In the food industry alone, robots are expected to create 70,000-90,000 jobs worldwide between 2017 and 2020.

Cobots compared to other industrial robots can increase employment opportunities within businesses as they can increase productivity and encourage upgraded skillsets. Rather than replacing their human counterparts these devices work alongside people in manufacturing and processing tasks. Moreover, as manufacturers aim to increase outputs and develop new product lines, cobots can help them multiply their workforce and transition employees from monotonous positions into roles with greater job satisfaction and compensation. 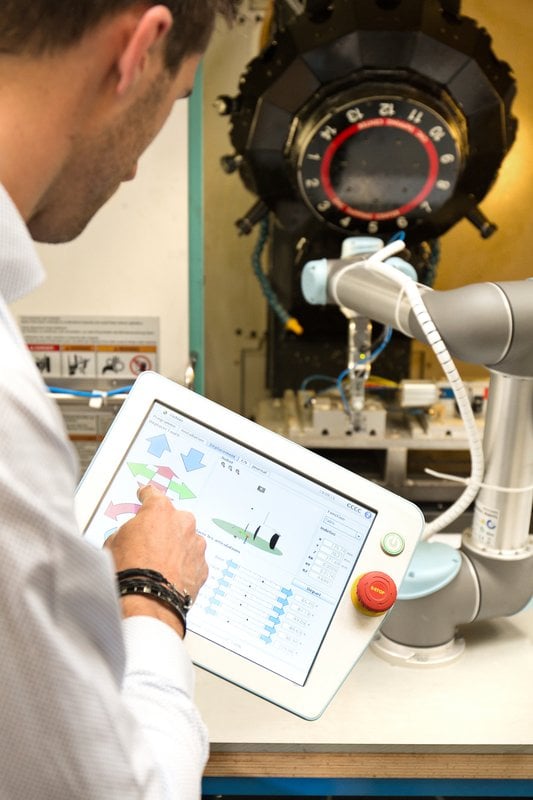 The cobot is not designed to replace the human workforce, but to take over strenuous or even dangerous tasks. As a result, human employees can use their creativity to turn to more complex projects. For instance, when robots take over minor assembly tasks, employees can move on to more nuanced assignments that require human ingenuity.

With the labelling tasks taken care of, employees are now able to focus on running several more machines and can engage in more varied tasks across the factory floor. Staff members feel a sense of pride from having learned to operate the robot and their ability to work on other activities has increased their job satisfaction.

Undoubtedly, the connected and collaborative workforce presents vast opportunities to boost manufacturing productivity and innovation. It also presents the prospect of enhancing safety and satisfaction in the workplace, while enabling more exciting roles for human workers and stimulating job growth itself.

Finally, as manufacturing processes evolve to become more smart and connected, less agile competitors that are too slow to adapt will be left behind. Manufacturers must realize that collaborative factories offer not only the potential to improve operational efficiency and other previously mentioned benefits, but also the potential to reduce rising labor costs in increasingly competitive markets.

From Cobot Pioneer to the “Nobel Prize” of Robotics: What Drives UR CTO Esben Østergaard?

France should look to robotics