Who cannot relate to this? You are driving to work, listening to the radio to brighten up the dull commute. But listening quickly becomes boring if the radio keeps playing the same five hit songs over and over again. Similarly, packing goods in a production can be a very dull task and while some people can make the best out of almost every boring situation, nobody enjoys doing the same repetitive job day in and day out.

That being said companies still need to package their products albeit tedious or even strenuous for employees. That’s where automation comes in; saving money, time, and freeing up workers for more demanding projects. A few years back, automation meant spending great amounts of money on heavy machines which required additional safety measures. Today, there is a trend towards small, flexible and lightweight robots, which can be employed in a number of tasks quickly and without the need to spend a big share of a company’s profits. This fact makes robots a valuable alternative especially for small- and medium-sized companies, that intend to increase their profitability, reduce repetitious responsibilities or only have limited space in their production lines.

Two SMEs are tackling the current challenges in their own, unique ways: The Icelandic dairy producer, Mjolkursamsalan Akureyri, with 80 employees, faced the challenge of increasing their productivity and reducing the monotony of the assignments at hand. The world’s biggest producer of pipe tobacco, the Scandinavian Tobacco Group, intended to relieve its employees from ergonomically unfavorable packing processes although their packaging line was in a space constrained area – a truly legendary challenge:

The aim of the Icelandic dairy producer was to re-design the production for cream cheese. In 2011 and 2012, the dairy producer acquired two UR5 collaboration robots, so-called cobots, and implemented them into their cheese cream packing process. These two cobots now split their work: the first one picks up four packs of cream cheese and places them in a plastic tray on a conveyor belt. The second cobot picks up these trays and stacks them on a pallet. In this way, Iceland’s biggest dairy factory was able to save several years of man-hours of monotonous duties and thus increased their profitability significantly.

Down with the sickness

Packaging processes can be strenuous assignments for the staff and can thus increase the risk of work-related illnesses. This has a negative effect on productivity and satisfaction of the worker. By integrating a UR5 into the tobacco packing process, the world’s biggest producer of pipe tobacco, the Scandinavian Tobacco Group, was able to free up resources from two employees. The robot has taken over the handling of lids for tobacco tins, which was done by hand in the past. As a result, these workers were able to take over more demanding projects. At the same time, the group was able to reduce expenditure on temporary personnel. Another bonus of Universal Robots’ cobots is that they can work on their tasks without the need of costly and spacious safety guarding based on completed risk assessment. This led to a simplified setup and cost reductions. 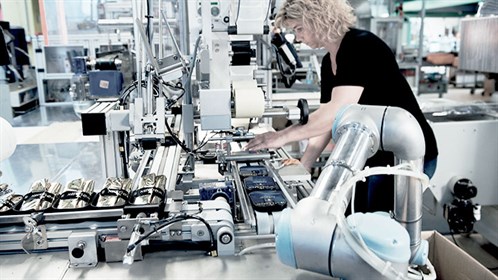 If you would like to find out, how Universal Robots can revolutionize your production processes in a legendary way, just check out our products here - or for examples of our cobots in action take a look at our case studies here.