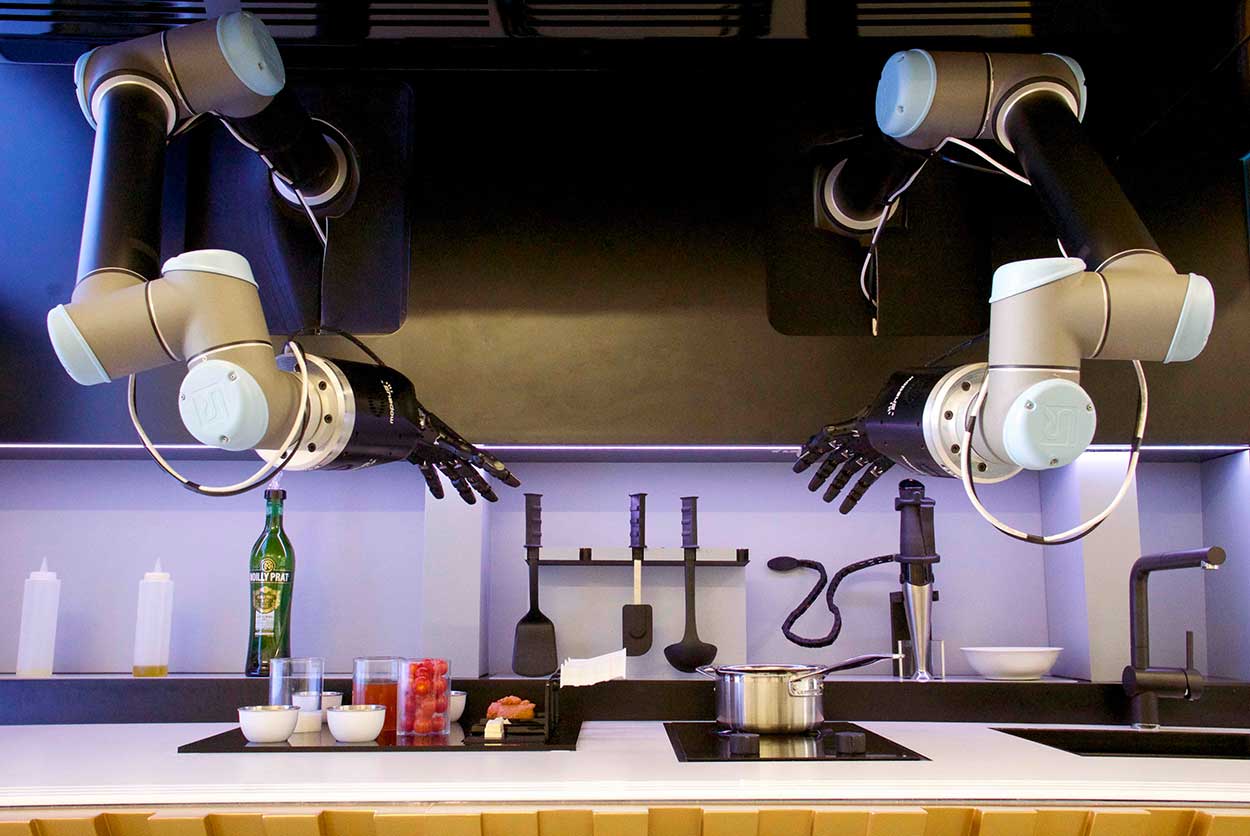 Collaborative Robots have been a disruptive technology in not only the manufacturing industry, but they have also opened the door for automation in other industries as well. Industries that have never been interested in robotics, are suddenly finding that with collaborative technology they too can reap the benefits that come from automation. What’s the difference? Why can companies outside of manufacturing now look to robotics when it hasn’t been an option before? There are two simple reasons:

First, collaborative robots are what the name implies. They are a robot that is capable of operating around people without the need of external guarding or safety devices (pending a risk assessment of the total application). This has been a gateway to new industries for robotics. Without the need for a large safety enclosure, robots can now be used in places that just wouldn’t have been feasible in the past.

You can find examples everywhere. They flip burgers at restaurants, fly airplanes, and even work as robotic bartenders. Some may think it’s a gimmick, but there is no doubt that these robots are effective, reliable, and their impact on other industries will continue to grow. But in these new industries such as food etc., companies typically do not have robotics engineers on staff to handle the robot. 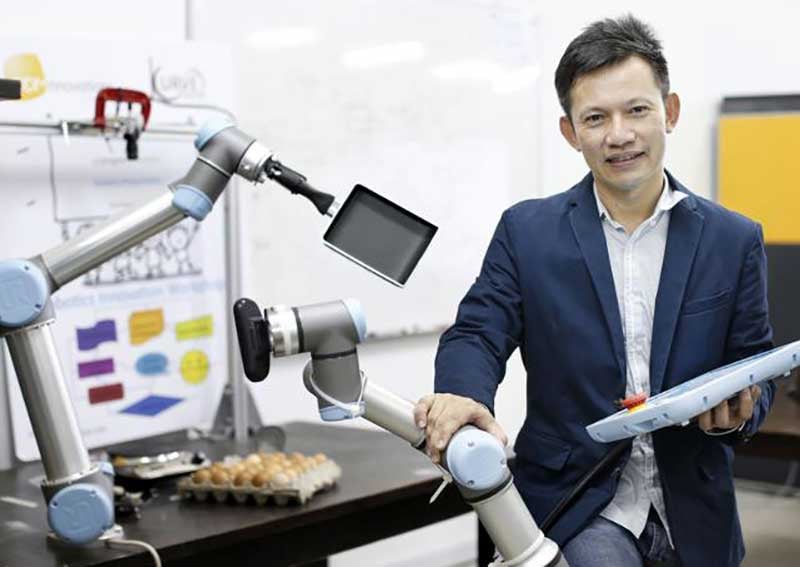 "Wouldn't it be nice if robots can free us from the boring tasks - like cooking eggs - so we can actually live life?", asks Mr. Hui, integrator of UR robots in Singapore and inventor of the “egg breakfast buffet” robot.

Second, collaborative robots are typically much easier to program than traditional industrial robots. Companies no longer need a staff of robotics engineers to program simple applications. The Universal Robot has a very user-friendly, easy to use interface that can make writing programs, modifying waypoints, and communicating over digital I/O very easy. And with the UR+ platform, 3rd party developers are now able to offer a wide suite of plug & play products for the UR robot arm with the same easy-to-use paradigm. 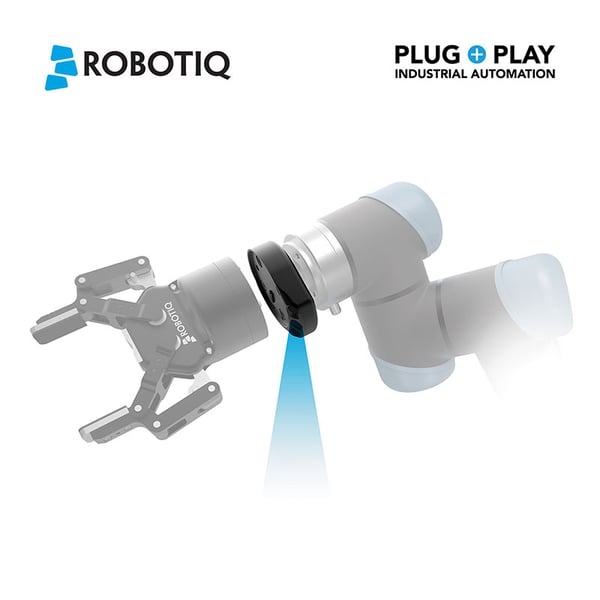 By choosing plug & play products from the UR+ showroom, users hit the ground running when installing their robot application as the products are certified to work well with UR cobots from day one.

To illustrate the ease of programming, I would often tell my customers that when I bring a demo unit home, my 8-year-old daughter, Maddy, can pick up the teach pendant and write a simple program. I was often curious if they believed me or not so I recorded a quick video of her writing her own program.

Is The Task Repetitive?

This is first on the list because it is possibly the most important question for a quick installation. Robots, whether collaborative or traditional, are programmed to carry out a task over and over again. While there are some methods to allow robots to have flexibility, the simplest and easiest of installations require the robot to carry out the same task over and over.

An example of this could be placing hamburger patties onto a grill and flipping them at a predetermined amount of time before removing them from the grill and placing into another location. This task, if performed by an employee, could involve someone standing in front of the grill and handling this process over and over until their shift is complete.

These type of repetitive tasks lend themselves very well to collaborative robot technology. The examples are endless and are not limited to just the food industry. Wherever a task is performed the same way over and over, there is the potential for robotic automation.

Before installing a Universal Robot, employees at Scott Fetzer Electrical Group (SFEG) in Nashville were doing 16,000 wire cuttings per day by hand. “Let the robot get carpal tunnel” as an SFEG manager put it as the company installed the robot.

What Are The Task Operating Hours?

This is a very important question to ask yourself. As a Robotics Specialist, this is always one of the first questions that I ask. When it comes to considering robotics, one must consider not only the feasibility of the application but also the return on investment (ROI) to determine if the application makes sense from a business perspective. Oftentimes this component gets overlooked until many hours have been spent on the engineering side.

ROI is variable and has to take not only the application into account but the hours of operation and the burden rate of an employee (pay rate, insurance, disability, social security, etc). With minimum wage on the rise, many companies are starting to realize faster return on investment periods for adding collaborative automation. 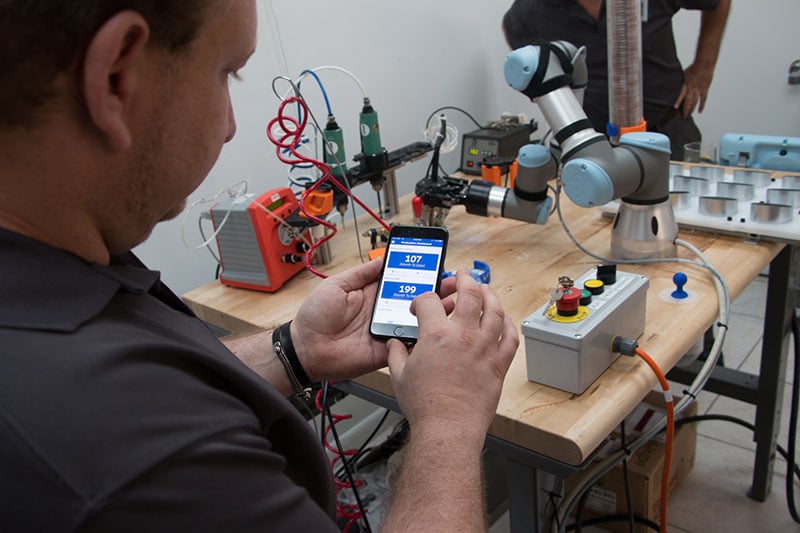 At Creating Revolutions in Miami, the UR3 cobot can run unattended after hours as the company monitors production rates and performance through a cloud-connected interface.

We touched on the “Dull” portion with point #1. But let’s elaborate on the dirty and dangerous portions. Dirty jobs are generally the tasks that employees do not want to perform. They could be smelly, grimy, or even involve the employee needing to take regular breaks to get cleaned up.

These can be a morale killer and impact productivity by employees feeling negative about the task they are being asked to perform. Some of these tasks even start falling into the dangerous category. Chemical cleaners, working around hot objects, or working in tightly confined spaces can become dangerous very quickly. To go back to our previous example of cooking burgers on a grill, there is the very real potential of an employee being injured carrying out this task. Not only is there the potential of an employee accidentally touching the grill and being burnt, there is the chance that grease could contact the employee during the cooking process and cause a potentially serious injury.

In some robotic applications, the main goal isn’t just to increase throughput or reduce cost but to alleviate the need for the operator to carry out dangerous tasks. However, the two are not mutually exclusive and all of these factors can be considered when evaluating the potential of robotic integration.

Aircraft Tooling in Dallas, Texas, automated a task that could easily be categorized as both dirty, dull, and dangerous, as they installed a UR10 cobot to perform the High Velocity Oxygen Fuel (HVOF) and plasma spray processes.

Are You a Fit for Robotics?

Hopefully, this gives a little insight into some of the factors that could help you decide if a robotic solution may be right for you. As always, please feel free to reach out anytime to discuss any specific questions you may have. If you need help calculating ROI, or just evaluating your application to see if it would be a good fit for robotics, we’re here to help. -> Request an on-site demo today

As a Collaborative Robot Specialist, Josh Westmoreland is responsible for the growth and development of new and existing accounts as a part of the team at Cross Robotics, a distributor of Universal Robots in Southeastern United States. With his knowledge and experience involving collaborative robots and surrounding technologies, Josh is able to take a consultative approach with customers to help them find the best solution for their application.