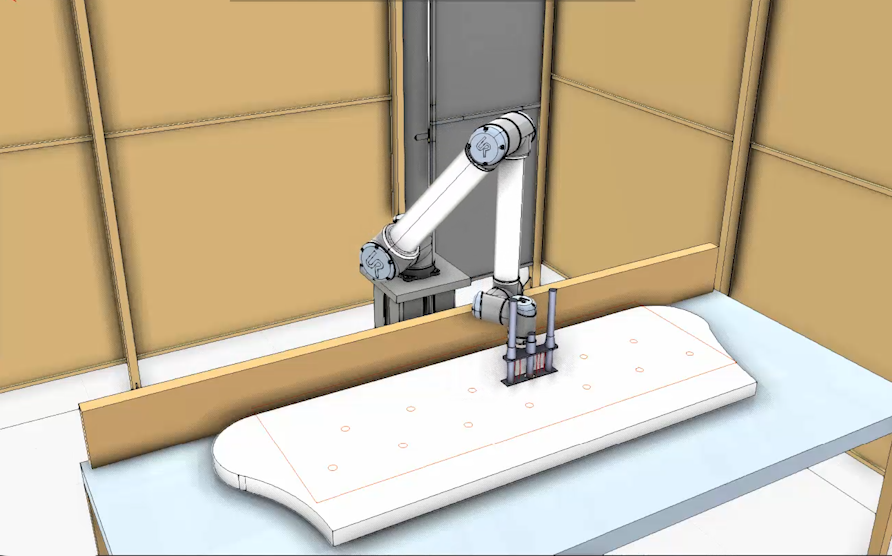 Universal Robots and OCTOPUZ work together to automate Fibreline’s manufacturing process while providing flexibility for the future.

Tufting, one of the most sought-after and classic upholstery styles, is commonly incorporated into the design of furniture. How is this Victorian button-like look achieved? We got some insight from Fibreline, the largest independently owned upholstery cushion fillings manufacturer in the UK. They are known for pioneering the use of carded synthetic fibres in upholstery cushions.

In the search for a way to efficiently drill holes through the pieces of foam used for the upholstery to create the tufted look, Fibreline determined automation was the key to achieving their production goals.

Watch a Universal Robot programmed with OCTOPUZ Offline Programming and Simulation Software efficiently drill holes through the pieces of foam used for the upholstery of furniture to create the tufted look. The video also documents how OCTOPUZ is used to program and simulate adhesive dispensing

The first step was to make the investment in the right robot. Flexibility was the most important feature they were searching for, thus they elected to purchase two UR10 Universal Robots. Universal is known for their highly flexible collaborative robots and Fibreline liked the possibility of redeployment in different applications down the road.

Two years later Fibreline identified another bottleneck in their production process. They needed a way to more efficiently program their robot paths.

Fibreline’s customers were sending DXF files for their drilling patterns which Fibreline then had to plot out and manually program using the UR programming functions. This was not only time consuming but also took the robot away from production.

This is when Fibreline contacted OCTOPUZ. Through OCTOPUZ they were able to program the robot offline, meaning the robot could continue to produce parts while the next part was being programmed. Universal Robots’ user-friendliness combined with OCTOPUZ’ powerful programming abilities lead Fibreline to achieve their production efficiency goals.

In addition, thanks to OCTOPUZ’ ability to post in URP code, Fibreline was able to tweak and amend their programs directly on the controller, a flexibility that gives OCTOPUZ a competitive advantage in the market.

Furthermore, to smooth out the process, the OCTOPUZ team created an automated DXF add-on that allowed Fibreline to bring in the DXF files provided by their customers and convert them into paths. The OCTOPUZ team also assisted Fibreline by automating the drilling process, tweaking the movement speeds and subroutines. Altogether, this lead to a much more efficient and automated process.

OCTOPUZ has helped streamline the programming process by taking it offline away from the robot, which means a lot less downtime!” said Marc Radcliffee, Technical Manager at Fibreline Ltd. As displayed with Fibreline, the implementation of a robot and an offline robotic programming and simulation software can drastically change and optimize the process in which a facility operates. Once the investment is made, it is evident that it is worthwhile. 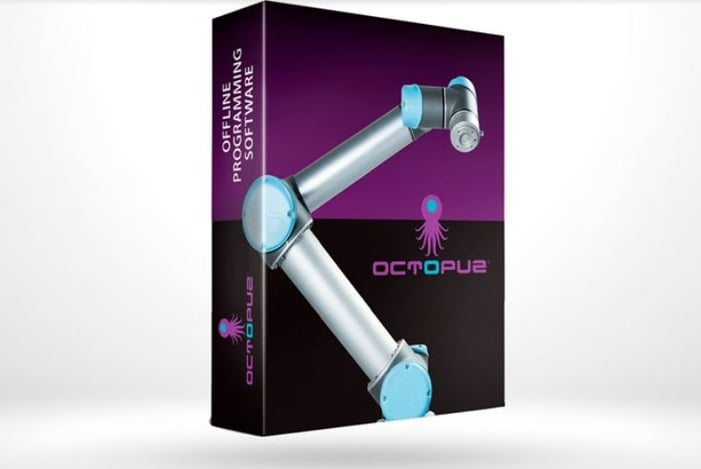 Find Octopuz’ offline simulation software in the UR+ showroom here

Marc also shed some light on the importance of making the investment as early as possible to start reaping the benefits of automation.

“Had we known OCTOPUZ was going to be a good fit for us we would have used them from the start. Instead we now we must convert our existing UR programs over to OCTOPUZ which is an additional step to our processes. Had I known how helpful it would be I would have engaged more people in the training offered by OCTOPUZ and I would have explored the additional functionalities that are available through the software that although aren’t directly linked to our primary robotic function, would have been good to explore.”

The future of robotics is bright. IFR World Robotics estimated that by 2020 there will be 1.7 million new industrial robots supplied worldwide. As the OCTOPUZ team looks ahead we project to continue to grow with the market and helping it innovate along the way. This is just the beginning, don’t get left behind.

“In the future, for our business, I foresee more automation and more robots being added. We are evaluating potential improvements from adding vision systems to and further robotics” said Marc Radcliffee, Technical Manager at Fibreline Ltd.

Want to find out more on how you get UR robots to talk to each other?
Download our e-book on multi-robot communication: 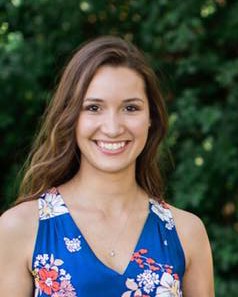 Natalie Adams is the Marketing Coordinator at OCTOPUZ. Headquartered in Waterloo, Ontario, OCTOPUZ Inc. provides offline robot programming and simulation software for businesses of all sizes, from small shops to global corporations, built on the concept of taking complex robotic programming and making it easy. Natalie has a degree in Spanish and Business with a focus in Economics. Over the course of her academic and professional career, she has gained a vast amount of knowledge leading her to create and execute marketing strategies to boost sales and engage existing customers.