Time is the best medicine

... with robots you need less! 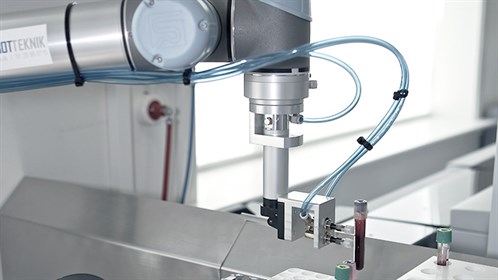 The medical industry needs to meet highest standards regarding quality and performance. These necessities are accompanied and aggravated by new and continuously changing requirements due to norms and legislation. The tools embedded in the process therefore need to be flexible and simple to operate, so that they may be handled by everybody involved. This is where collaborative robots come into play as they are easy to re-deploy between multiple applications without changing the process layout. Thus, they provide the medical industry not only with improved adaptability, which makes it possible to constantly react to changing conditions, but also with a key factor for their users: time. Let me share some insights on how robots help products arrive in the right places, as fast as possible at a hospital in Gentofte, Denmark, and at a University in Krakow, Poland.

Let’s start in Denmark where the management of Gentofte University Hospital was searching for an economic way to automate the process of sorting blood samples. The solution had to work within the confined space conditions of a laboratory and permit the lab technicians to intervene at any time. In addition, there was the challenge to maintain valid speed standards without having to expand the staff, while at the same time keeping up with a 20 percent rise in blood samples needed to be analyzed. The only promising solution was provided by the use of collaborating robotic arms.

The crucial factors for the integration of two UR5 robot arms into the laboratory were their safety features: Once the risk analysis had been completed successfully, the robots were able to run completely without protective safety fencing – for which the Gentofte laboratory had no space left, anyway. “We needed an intrinsically safe, easy-to-use solution which was able to grab and sort the samples quickly and to insert them into the respective module for analysis. Universal Robots complied with all these criteria”, says Steen Stender, Chief Physician of the Gentofte University Hospital.

Now, the first robot lifts the samples and places them at a barcode reader. Next, it recognizes where to drop them, based on data input from a camera, which photographs the sample’s screw cap’s color. Next it is the second robot’s turn – its task is to load the centrifugation and analysis machines with the samples. 3,000 samples are being processed like this every day. The automation of the procedure saves time and frees up employees from a monotonous activity. Stender is pleased with the solution: “Our staff is enthusiastic about the robots. […] Furthermore, our ambulant patients are spared from an additional ride to the hospital as their samples can be analyzed within one hour now.”

However, the end of opportunities for the use of robot arms in the medical sector has not been reached at this point: Due to its repeating accuracy of 0.1 millimeters and the possibility to equip the robot with almost any thinkable tool, the AGH University of Science and Technology in Krakow, Poland uses an UR5 for the implantation of stem cells into human bodies. Another one is used for the blending of cytostatics. This is a highly toxic procedure and thus, under normal conditions, a highly dangerous workplace for humans – the UR5 relieves humans from this dangerous task and enables them to pursue other, less precarious activities.

There are yet more potential applications that  “colleague robot” may take on, like endurance tests in industrial laboratories, for which steadily performed moves, sometimes in millionfold execution, are important. The robot records minimal forces rising up or falling off during the activity, registers possible fractures, and stops the execution if necessary. In other cases, the absolutely precisely performed and clinically hygienic cleaning of devices, like work pieces or containers, is the decisive quality criteria, where the robot is able to reach every little spot of the object. Furnished with a protective cover, the robots are cleanroom-compatible, easy to disinfect as well as to clean.

All these notably different, new application areas for robot arms provide us with two outlooks on our future workplaces in particular: First, we will waste less and less valuable human effort with time-consuming, monotonous or potentially dangerous activities – activities which have to and will have to be done, though. Second, working processes which require high precision and rigorously punish mistakes like the medical sector and other industries – e.g. in surgeries – will be conducted with a precision and reliability which could never be achieved by a human. This will come to the advantage of each and every one of us.