French television viewers of the Rio Olympics were treated to robot enhanced camera work with Universal Robots’ partner Augmented Robotics, AR+. The company, located in Laval, France, joined a UR10 robot arm with its proprietary software for an operator-free camera solution where the camera can be mounted to either a gantry or dolly track system to work primarily in closed spaces or to perform precise, repetitive camera movements. 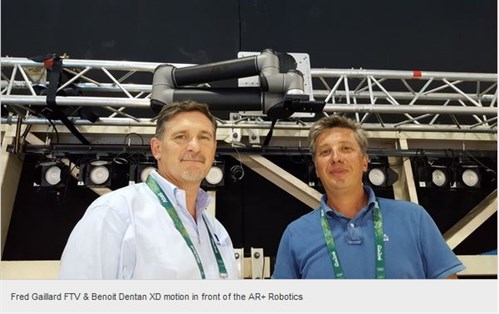 “The UR10 is the only arm we use because it can carry any camera weighing up to a balanced 8 kilograms. It is perfect for making wide shots, both simple or complex, as the robot is very accurate. It is quiet enough for broadcast operations. We added leather sleeves to the robot arm to allow application of a matte black finish for the broadcast environment,” said Mr. Gautier.

Why did FTV choose this solution? Were there any interesting developments in setting up the system that were surprising?

“The problem FTV had was the fact that their work space was really restricted, so they could not use a traditional crane. What is great with the UR10 is that it is compact. We fixed it on a trilight structure enabling every possible movement. The FTV director also appreciated the many possible trajectories for the robot that was enabled by our software. He never lost any quality, even in loop mode,” added Mr. Gautier.

AR+ has been working with UR assisted camera operation with Riot Games-USA, RenTV-Russia, Markiza-Slovakia and with TV news stations iTélé and LCI in France. AR+ will also be exhibiting at the world’s largest trade show for AV equipment, the International Broadcast Convention (IBC) in Amsterdam, September 9-13.

IBC was the launch pad for the first prototype of AR+’s camera solution back in 2014.  Universal Robots General Manager for Southern Europe, Jacob Pape Pascual, recounts how AR+ along with technicians from the French TV station first started working on the solution back in 2013:

“What makes the collaboration with AR+ so interesting is how it exemplifies the way our robots really enable the use of industrial robotics beyond the manufacturing sector. This creates awareness of automation solutions in new industry sectors that might now have considered using robots in the past.”

And this is not the first time a Universal Robot has been used in camera work.  In 2014, the Metropolitan Musem in New York City used UR robots for an interactive display rotating a camera focused on fashion gowns, simultaneously projecting the images onto gallery walls.