When Inspection is Mission-Critical, Get a Cobot

“When operators look at thousands of parts a day, they sometimes become “snow-blind” to defects. But that never happens to robots.” Operations manager at Zippertubing in Arizona, USA, Tim Mead, describes in an interview with The New York Times how his UR5 cobot now tends the snap-set machines that add thermal wrap around hoses, pipes, and cables. The 25-second cycle concludes as the UR5 presents the piece to a vision camera that inspects whether the snaps are added correctly. Depending on outcome, the UR5 is directed to place the finished piece in either the “good” or the “scrap” pile.

“The biggest benefit we’ve found with the UR5 cobot is that our product quality really has improved; the robot has been running for eight months now and we have gone from having some product returns to now zero defects on parts produced,” says Mead. “With the robot itself, we can specify 300 percent more tolerance on our parts than with manual operation,” he says, adding that the UR5 also solved Zippertubing’s difficulty in hiring staff for this repetitive task. “It used to take three people to do all of the operations that the robot now does, so this has really opened up production capacity for us.”

Making the robot the “brain” of the cell
Deploying the vision camera with the UR5 first seemed like a daunting task. “The really tricky part was “How do I get the robot to talk to the camera, and who’s in charge?” says the operations manager. “So learning about the Universal Robots, we actually were able to make that essentially our PLC; the robot is the brain—it sends out all the commands and it takes in all the feedback.” The robot simply looks for feedback from the camera.  If it doesn’t find it, it says it’s a bad part; if it finds it, that means the part was good, and it sorts it accordingly.

After the male and female snaps have been inserted, the UR5 places the fabric under a vision camera lens for quality inspection and sorts it in either a “good” or “reject” pile.

“We chose Universal Robots’ UR5 for a few reasons,” says Matt Hesselbacher, engineering manager at Zippertubing. “After a quick demo we realized this was a collaborative robot we could integrate on our own. With products that change from month to month, we were also looking at the versatility,” explained Hesselbacher. “And as always, safety was a priority, as operators would be working around the robot, feeding it raw parts and take away the finished pieces.”

Zippertubing installed an area scanner making the robot slow down as soon as a person enters the work envelope.

A company looking for 100 percent quality on its assembly line is Comprehensive Logistics. At the assembly line in Youngstown, Ohio, engine parts move like clockwork on a conveyor with 60-second take time for each station. “It’s a fast-paced line; everything is just-in-time, just-in-sequence,” says Gary Bobalik, director of marketing at Comprehensive Logistics. The company is the leading logistics and contract manufacturing provider to two of North America’s largest automotive enterprises, operating suspension, powertrain, and interior component sub-assembly lines. 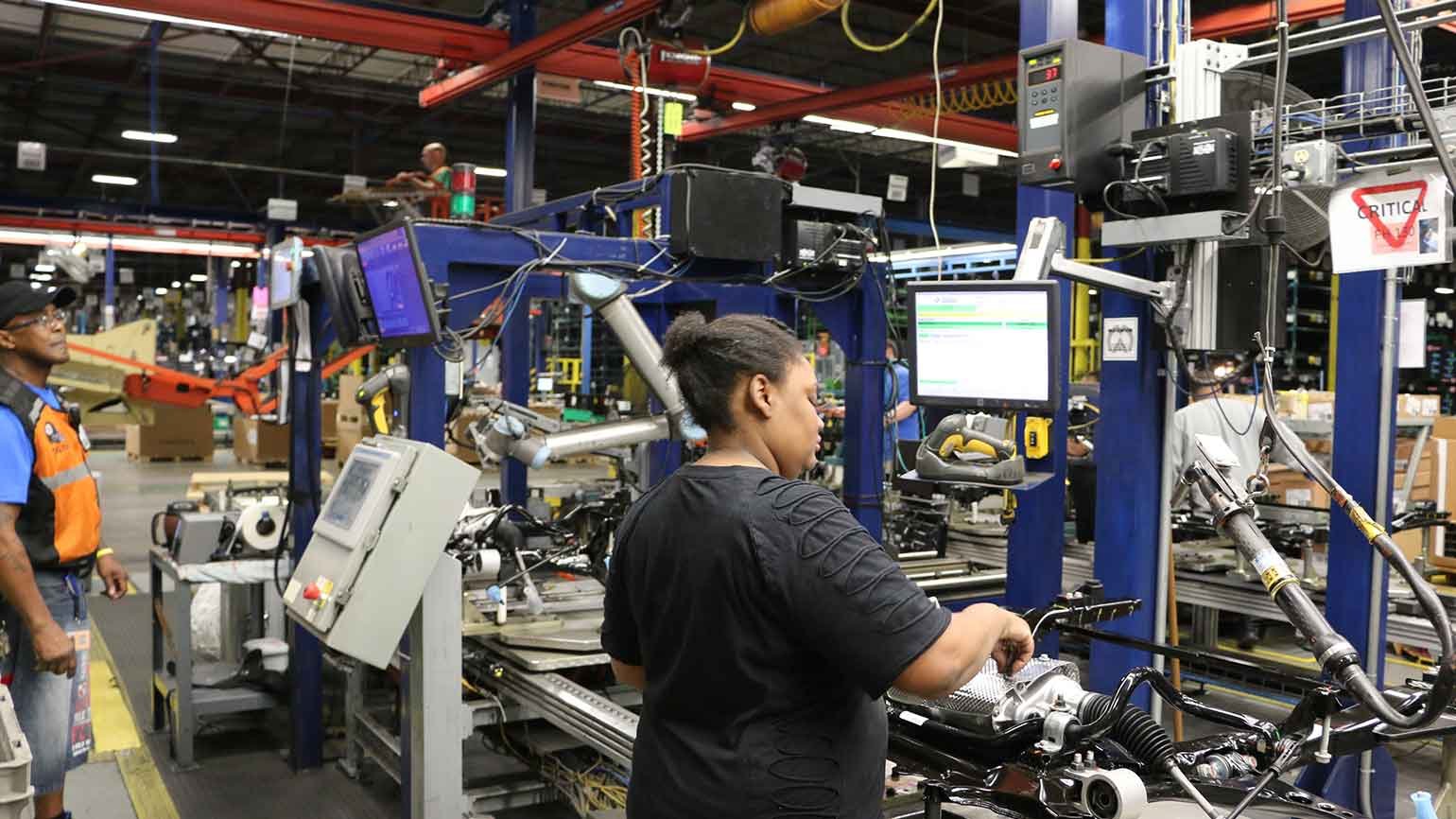 At Comprehensive Logistics in Ohio, USA, a UR10 works side-by-side with the workers on the assembly line inspecting the cradle sub-assemblies

The line leaves no room for error. As the engine cradle sub-assemblies reach the end of the line, Comprehensive Logistics needs to ensure that each sub-assembly, which includes a critical steering-gear wire harness connector, is fully seated and locked. “If there is an intermittent loose connection or it’s connected and not locked into place, it can cause anywhere from an intermittent issue to a complete loss of the power steering, which is a level 8 on the severity scale,” says Mike O’Keefe, Comprehensive Logistics’ value-added assembly superintendent. “It’s a life-threatening failure mode, so we need to make sure that those clips are locked into place with 100 percent confidence.” The challenge is a familiar one to all manufacturers. “Industry-wide,” says O’Keefe, “manual inspection is only about 80 percent efficient, so we were looking for repeatable quality through an automated system.” 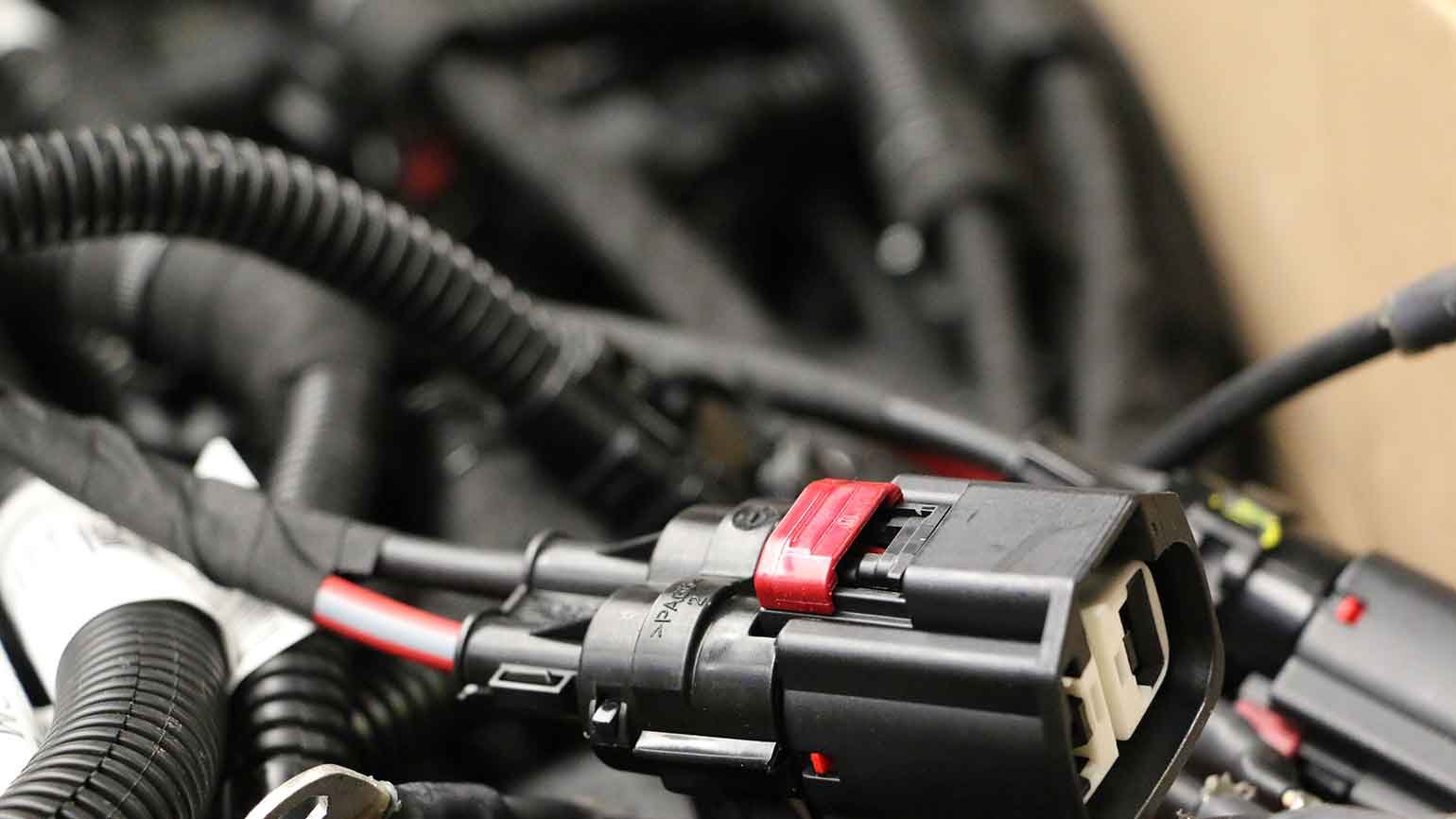 Checking the correct assembly of the plug-ins for the steering gear wire harness is mission critical. If there is an intermittent connection caused by a connector not fully seated and locked into place, it can cause a loss of the power steering, which is a level 8 on the severity scale - meaning a life-threatening failure mode.

Stationary camera couldn’t reach tight spots
This process was causing the Ohio manufacturer headaches, and the stationary multi-camera system the company implemented couldn’t position cameras into tight spots, impeding it from being as repeatable as Comprehensive Logistics needed. “The data gathered by the camera system wasn’t as pure,” adds O’Keefe, who also experimented with a probe-style robot that did not meet repeatability requirements.

The company started researching alternatives, but the solution would be a tall order – it would have to support Comprehensive Logistics’ up-time requirements, be simple to use, and integrate easily with the processes and people on the line. “We had to find something that wouldn’t contribute to a potential safety issue,” explains O’Keefe. “With Universal Robots, it quickly became clear that this was a cost-effective, light-duty robot that could move a vision camera to the right positions safely and repeatedly. The dexterity of the Universal Robot enables it to get underneath where the mission-critical points are and be 100 percent repeatable.” 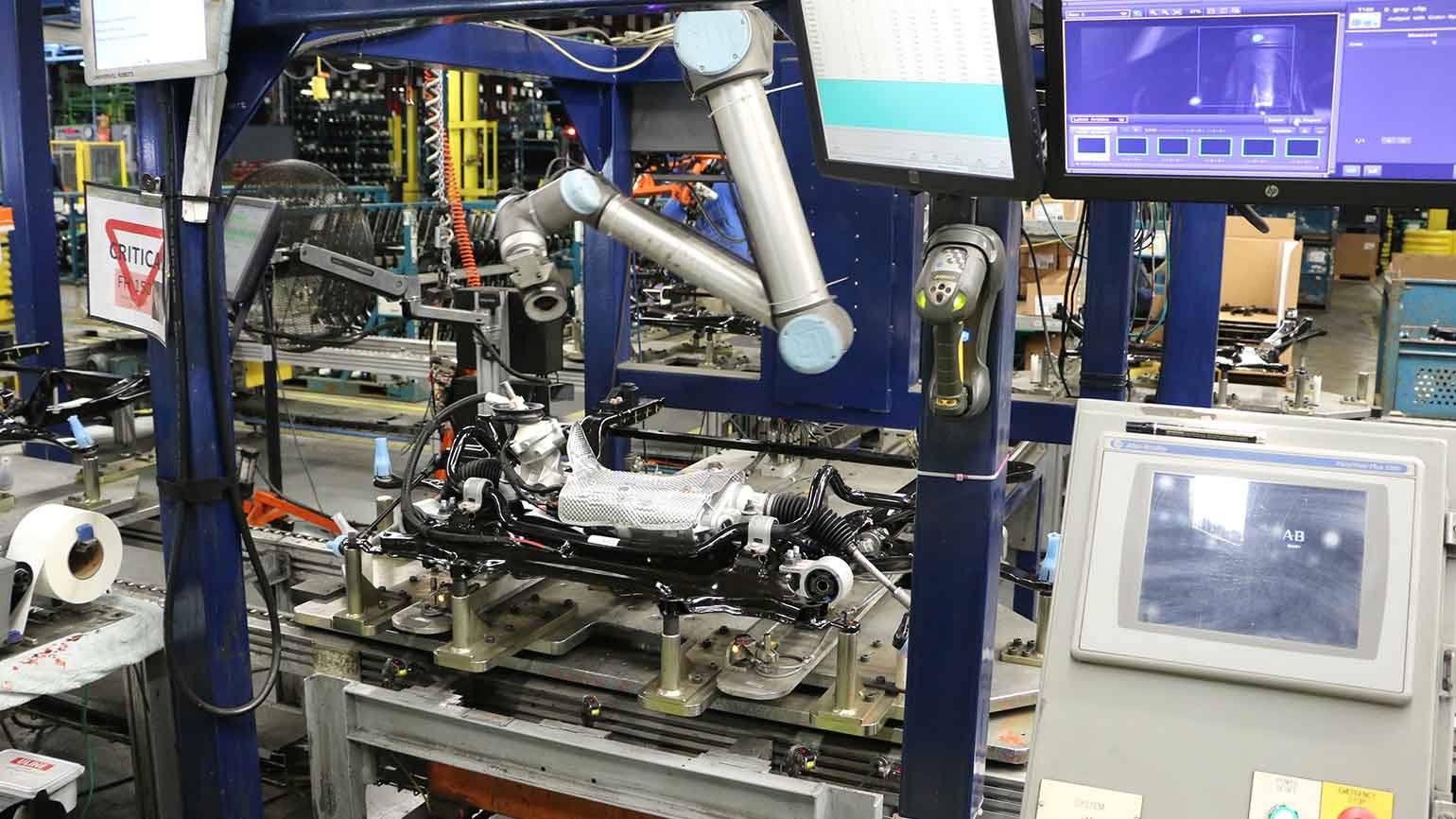 The ceiling-mounted UR10 cobot is equipped with a vision camera and moves quickly between inspection points, snapping a picture of each connection before it retracts to a “home” position and waits for the next assembly to inspect. The line assembles engine cradle versions for both a diesel motor with 11 inspection points and a gas motor with nine inspection points. Software integrated with the UR robot tracks the build through the line, informing the robot which version needs to be inspected. Each image taken is immediately shown on a screen next to the robot while a second screen with a diagram of the engine cradle shows each inspection point completed with either a green or a red check mark to indicate pass or failure.

After an initial estimate of ROI within seven months, Comprehensive Logistics’ O’Keefe believes that will actually come down to about four months, cost savings that the manufacturer can then put back into the business, without anyone losing their jobs.

Want to add vision to your cobot? Check out our UR+ vision solutions certified to work seamlessly with UR cobot arms.

Want to learn more about the benefits of the UR+ ecosystem? Download our whitepaper here