Robots of Today and Tomorrow: The Types of Industrial Robots 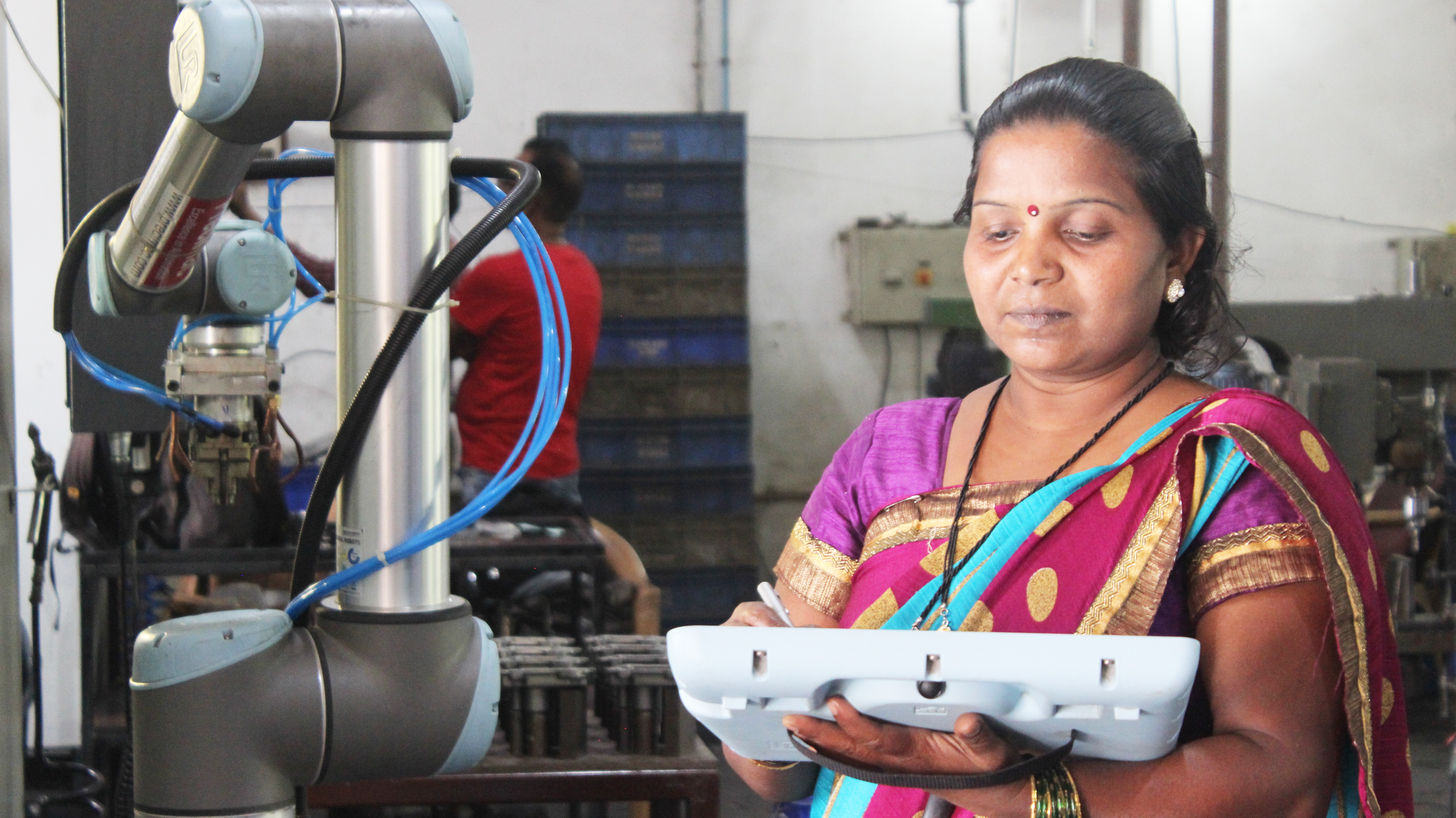 In our very first blog, we learned how the term 'robot' came into existence. Humankind was introduced to the term way back in 1920, as part of a play named Rossum's Universal Robots. In the play, a robot was depicted as a human-looking or a humanoid machine.

Over the years, the meaning and definition of a robot has undergone considerable change. Today, in very simple terms, a robot is a machine that allows humans to program it to run tasks automatically. The different types of robots are, therefore, classified based on the area of work or the type of design.

For example, based on the field of work, robots can be classified as Industrial, Medical, Military, Entertainment, Exo-Skeletal, Underwater, or Drones. In this article, we examine the types of robots used for industrial purposes.

The Basis of Classification

Types of robots in industrial use can be classified based on their technology, axis configurations, the tasks that they need to perform, payload factor, speed, and the needed range of motion. Constant advancements in robotic technology have reduced the cost and the size of robots, allowing them to execute tasks in smaller-scale applications while reducing their footprint.

The following are the types of robots used for various industrial applications: Cylindrical robots are quite similar to Cartesian robots, except that they operate within a cylindrical work envelope. Cylindrical robots have one angular movement and two linear movements. The cylindrical robot has a rotary joint along the joint axis for circular motion and a prismatic joint for linear motion. It is chosen for its economical use of space and the ability to reach small openings in cylindrical objects.
Cylindrical robots are relatively inexpensive, flexible, compact in size, and can work well in conditions unsuitable to humans. They are typically used to simulate human activities like assembly operations, spot welding, handling heavy materials, handling die casting machines, and handling machine tools. They are simple to use and install and are generally available as complete solutions with minimal assembly. Cylindrical robots have one significant drawback - they cannot rotate a full 360 degrees due to mechanical design limitations. 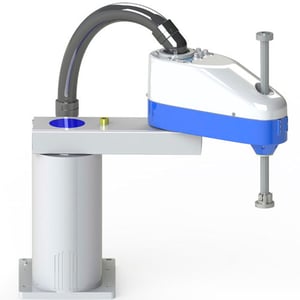 SCARA stands for Selective Compliance Articulated Robot Arm. SCARAs are the fastest of all industrial robots. They come equipped with linear X, Y, and Z axes along with the rotary motion of cylindrical robots.  SCARAs have four degrees of freedom. They have a cylindrical work envelope with variations in the diameter and depth of the cylinder.

The arm in the SCARA is selectively compliant in the X-Y axis, but rigid in the Z-axis, making SCARAs ideal for fast, repeatable,  and point-to-point movements.  SCARA joints are all capable of rotation and can be thoroughly sealed and safeguarded, which is very important before deployment in dusty or corrosive environments, or for underwater applications.

SCARAs are ideal for modern assembly work, where fast movement with light payloads is required.  Some of the tasks that SCARAs are particularly good at are Pick & Place, Laser Engraving, Soldering, and 3D Printing. SCARAs can work in high-speed assembly and are faster than all other robot types except the Delta class of robots. The main disadvantages of using SCARAs is that they are limited in movement, are higher priced, and have a large work envelope with a portion that they cannot reach.

Also known as Parallel Link Robots, Delta robots are very different from the other types of robots mentioned above. A Delta robot uses three or four lightweight arms, which are connected via a ball-joint to a central hub. This gives it the appearance of a spider. The arms are jointed in the middle, bending inwards. They are all connected to a tooling plate, to which the end-effector is attached. Each arm is connected to a motor situated in the hub, creating coordinated movements for the arms, pushing the elbows inwards or outwards, while the hub remains parallel to the work surface.
Delta robots have a limited work envelope but can achieve high speed and acceleration in the assembly line. With technical improvements in motion control, vision guidance and conveyor tracking, delta robots are gaining usage in a variety of industries like FMCG, electronic components manufacturing, solar energy cells manufacturing, food, pharmaceuticals packaging, and medical devices manufacturing.
The main drawbacks of Delta robots are the high cost, need for extensive training for operation, and the possibility of the payload slipping due to high-speed motion. 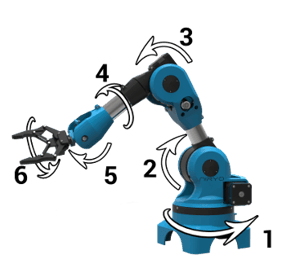 As the name suggests, 6-axis robots can move in 6 planes, meaning that they have six degrees of freedom. Along with the regular X, Y, and Z planes, these robots also allow pitch, yaw, and roll movements. Their programming is more complicated compared to other industrial robots. 6-axis robots have an unmatched ability to make movements where the other robots cannot reach. This superior ability for movement allows these robots to mimic a human arm as a whole. They are widely used in the automotive and aerospace industry, where they can be used to weld, palletize, drill, screw, paint and apply adhesives with ease. In comparison to the above robots, 6-axis robots have mobility, are easier to move or mount, and have a wide vertical and horizontal reach. 6-axis robots cost more since they usually have proprietary controllers for executing complicated tasks and require more programming for making complex movements. Additionally, traditional six-axis robots require a large amount of space for cages and safety scanners, as they have the potential to injure humans who cross the robot’s path of movement. This often makes them difficult to deploy for manufacturers who do not have a large amount of space on the factory floor.

The increased sophistication of the supply chain, more intelligent control systems, AI and ML-based programming, integration with Industry 4.0 ready assembly lines, and automation of the entire production cycle has led to the increased use of collaborative robots, or cobots.

Unlike their traditional six-axis robot predecessors, cobots are built on the concept of Human Robot Collaboration, and enable safe physical interaction with humans in a shared workspace. This is thanks to their advanced safety features, primarily a protective stop that is activated when a person comes in contact with a cobot to ensure there is no injury. Cobots are small, and take up lesser space, especially because they usually don’t need cages because of their safety features. In fact, the UR3 from Universal Robots can even easily be mounted on a table because of its compact size. The programming is also simple, with setup for a basic cobot application often taking less than a single day. All this makes them the automation solution of choice for an increasing number of manufacturers. Furthermore, Human Robot Collaboration is a key tenet and lever of Industry 4.0 and thus, cobots enabling large and small manufacturers alike to take a step in the direction of the latest industrial revolution.

Cobots help humans by handling highly repetitive, difficult, painful and dangerous tasks, increasing productivity and efficiency of the manufacturing process. This frees up the time of human operators to concentrate on the most qualified tasks with the highest added value. In fact, workers are often taught to handle the cobot and upskilled to handle tasks that require human ingenuity, thereby eliminating the mental and physical stress they may have been facing before the introduction of cobots.

Their flexibility and versatility of collaborative robots means that they are used in an array of industries for a multitude of applications, ranging from machine tending and quality inspection to packaging and palletizing. 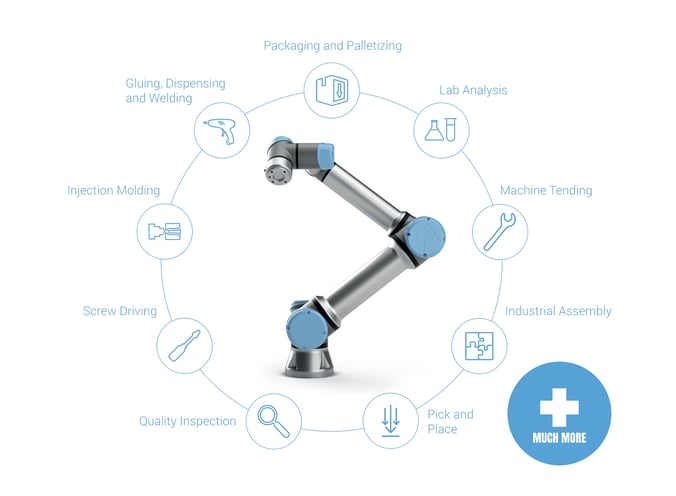 Traditional robots have been continuously evolving to solve the automation challenges faced by industries as competition and globalization have made it the need of the hour to deploy effective solutions to increase efficiency and quality.
As we look ahead to the future, we are can see that we are now in the exciting phase in the deployment of cobots, which are increasingly being seen as instrumental in driving advanced automation in the factories of the future.

Cobots are the most flexible tool available to manufacturers to enable them to quickly reconfigure their operations for new products and processes.  The inherent advantages of a low footprint, ease of deployment, and re-programmability for small batch production runs are what makes cobots appealing to them. Cobots ‘’democratize’’ automation by allowing manufacturers of all sizes to automate applications they may not have been able to originally, thanks to their flexibility, ease of use, and low footprints. They are thus, used by MNCs and startups alike, and are proven to be one of the best investments that an organization can make to skyrocket production, efficiency, and quality –  all while enabling otherwise small players to use a future-forward technology that allows them to stay competitive in a global marketplace.